Hogs are 'work in progress' ahead of Mizzou rematch 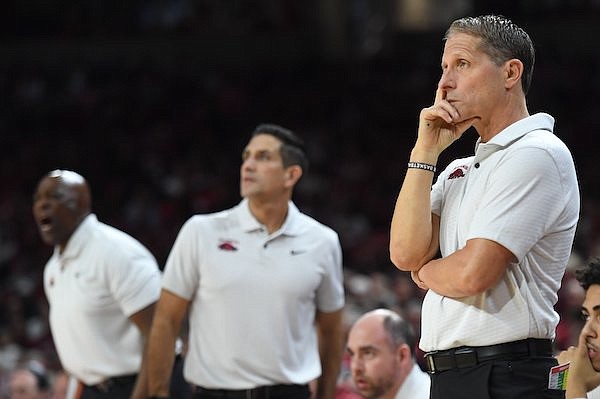 Arkansas coach Eric Musselman (right) watches Wednesday, Jan. 4, 2023, during the first half of play against Missouri in Bud Walton Arena in Fayetteville.

FAYETTEVILLE — Following a 97-84 loss at Vanderbilt on Saturday, Arkansas coach Eric Musselman made mention of his team trying to figure out life on the road in the Southeastern Conference.

A 0-3 mark away from home in the league was the result of letting a 10-point second-half lead dissipate. Though the loss stung, the Razorbacks were forced to quickly shift their attention to a trip to Missouri.

Arkansas, No. 25 in this week's Associated Press Top 25 poll, will be the first team in the SEC to play four road games when it tips off against the Tigers at 8 p.m. on Wednesday.

On one hand, it is a challenging open for a team attempting to find an identity and its way. On the other, perhaps lessons learned in previous road trips can come in handy amid what is expected to be another hostile environment in Mizzou Arena.

“They're still learning,” Musselman said Tuesday when asked if his team better understands what it takes to win away from home. “I mean, it's a roster that's still learning, still adjusting, still trying to figure out who they are — who we are.

“All those things are still a work in progress for us.”

The Razorbacks had “a day to themselves” on Sunday then reconvened Monday. During his radio show Monday night, Musselman said they had one of their best practices of the season.

“I think they practiced hard. They practiced with a focus. It was physical,” Musselman said. “We didn’t do anything Sunday, so (it was good for players) not be on their legs and come back fresher both mentally and physically.

Vanderbilt’s 97 points are the second most allowed by an Arkansas team under Musselman. The Razorbacks gave up 99 in a loss at Georgia in February 2020 when current Minnesota Timberwolves guard Anthony Edwards led the Bulldogs with 26 points.

The defensive issues that plagued Arkansas against the Commodores dropped the team from 11th to 22nd in the country in defensive efficiency, according to KenPom data. The Razorbacks rank ninth in SEC-only games in that category, allowing 110 points per 100 possessions.

Musselman said the Razorbacks need a shot of confidence, but there is only one way to get it.

“You’ve got to match all of those areas in order to give yourself a chance to win on the road.”

Another aspect that figures to be paramount for Arkansas is perimeter defense. The Razorbacks gave up a season-high 10 three-pointers against the Commodores, and SEC opponents have hit 37.9% of their attempts from deep to this point.

Seven times this season the Tigers have made 10-plus threes at home.

Avoiding a slow start and limiting the effectiveness of Missouri forward Kobe Brown will be key, as well. Arkansas trailed the Tigers 25-8 in the first half on Jan. 4 before rallying to win 74-68 in Fayetteville.

Brown scored 11 points on 3 of 7 from the floor in the first meeting between the teams. It is his lowest output in SEC play and Missouri’s last six games.

Brown is averaging 18.4 points on 46.2% shooting in SEC games. He had 21 points, 6 rebounds, 2 assists and 5 steals during the Tigers’ road loss to Florida on Saturday.

“They’re an explosive offensive team when you look at their numbers, and they’re a team that creates a lot of steals, so I think some of the same themes that we had going into last game (still apply),” Musselman said. “But we cannot get behind by 17 like we did at Bud Walton. We need to play better basketball earlier in the game, then we certainly have to play better basketball finishing games than we (did) against Alabama at home (and we have) got to finish a lot better than we did at Vanderbilt, as well.

“As a player, as a competitor, you go out and you play the next game and try to elevate your performance. That's the theme and the message.”