Hogs looking for uptick in takeaways 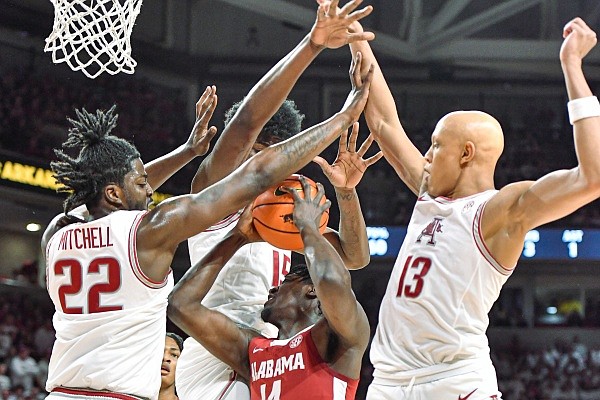 FAYETTEVILLE — Going into SEC play, Arkansas was 11-1 and had outscored its opponents 266-119 in points off turnovers, including 69-14 in the previous 2 games against Bradley and North Carolina-Asheville.

“But when you get into conference play, for the most part, teams take a little bit better care of the ball,” Arkansas Coach Eric Musselman said before the Razorbacks’ SEC opener at LSU.

Unfortunately for the Razorbacks, their SEC opponents have taken much better care of the ball than most of the non-conference teams Arkansas routed.

LSU started the trend when the Tigers beat Arkansas 60-57 and outscored the Razorbacks 13-4 in points off turnovers.

The Razorbacks averaged 10.7 steals in their first 12 games, but that statistic has fallen to 5.6 in SEC games. They had only three steals — two by Ricky Council and one by Jalen Graham — in losing 97-84 at Vanderbilt last Saturday.

“Of late we have not been creating the same turnovers as we were earlier,” Musselman said Monday night on his radio show. “We haven’t been having the same number of steals. (Those are) areas that we’d like to try to get back to.”

More from WholeHogSports: Razorbacks fall to No. 25 in latest AP poll

The No. 25 Razorbacks, who have a minus-3.4 turnover margin in SEC games, will try to get back to converting forced turnovers into offense when they play Missouri (13-4, 2-3) at 8 p.m. Wednesday at Mizzou Arena.

Arkansas rallied from a 17-point deficit in the first half to beat Missouri 74-68 on Jan. 4 in Walton Arena, though the Tigers had a 21-8 advantage in points off of turnovers.

“If you look at the last game against Vanderbilt, it was not our offense,” Musselman said Sunday night on his television show. “It was defense, competitiveness, trying to guard a guy one on one.

“So all I know to do is continue to drill those areas. But certainly defensively we’ve taken some giant steps backwards.”

Musselman said on his radio show the Razorbacks had a good practice Monday.

“It was one of our better practices of the year,” he said. “It really was.”

SEC opponents have hit 91 of 127 free throws against Arkansas compared to the Razorbacks hitting 70 of 112.

Alabama hit 25 of 36 free throws and Vanderbilt hit 24 of 36, as the Razorbacks were outscored a combined 54-30 at the line by the Crimson Tide and Commodores.

“Free throws attempted, we’ve talked about how important that is, though the last two games we put our opposition on the foul line 36 times,” Musselman said on his radio show. “Which is obviously way, way, way too many.

“So we’ve got to learn how to defend without fouling. We’ve got to obviously play better defense than we did the second half of that last game.”

“When an opposing team goes on a run, you’ve got to try to shorten that run to the best of your ability,” Musselman said on his TV show. “It’s not just, ‘Hey, my shot’s falling and now I get a defensive stop.’

“Sometimes shots aren’t falling and you need a stop. You’ve got to rebound the basketball.”

“Missouri takes a lot of threes. They make a lot of threes,” Musselman said on his radio show. “They spread the floor, have really good guard play, so our defense has got to be much improved off the Vanderbilt game.”

Musselman was asked by a fan during his radio show about the team’s mindset with a 1-4 SEC start.

“We’re still ranked 25th in the country,” Musselman said of the Razorbacks being in The Associated Press poll for 17 consecutive weeks going back to last season. “Have we played good basketball of late? Absolutely not. We’ve just got to play with some more confidence.