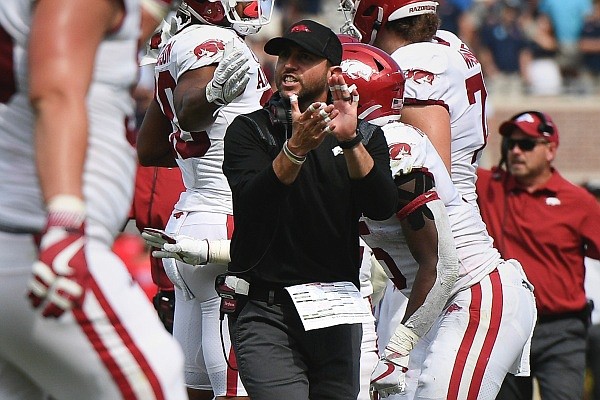 Briles showed up on Dykes’ radar following the departure of offensive coordinator Garrett Riley who took the same position at Clemson. Riley won the Broyles Award in 2022 as the nation’s top assistant coach.

The Horned Frogs (13-2) had an unbeaten regular season at 12-0 before falling to Kansas State in the Big 12 Championship Game and then taking a 65-7 loss to Georgia in the College Football Playoff title game last Monday.

Several media sites in Texas have reported on Dykes honing in on the Texas native Briles to fill the vacant role, but they also have discussed the inherent potential problems due to TCU’s bitter rivalry with Baylor from the last decade.

More from WholeHogSports: Easter locked in with Hogs after visit

Briles was on the Baylor staff from 2008-16 and offensive coordinator for the final year of his father Art’s tenure at Baylor, when the Bears rose into national prominence with four 10-plus win seasons in a span of five years between 2011-15.

Art Briles and then-TCU coach Gary Patterson had some squabbles during that era.

Other reported potential targets for TCU’s offensive coordinator job are Graham Harrell, Seth Littrell, Jake Spavital and Jeff Lebby, who all have Texas ties or ties to the Air Raid system that Dykes learned in association with Hal Mumme and Mike Leach.

Briles, 40, has produced consistently strong offensive numbers in three seasons at Arkansas under coach Sam Pittman. The Razorbacks ranked 16th in the FBS in total offense last season with 471.4 yards per game. They amassed 3,077 rushing yards and 3,051 passing yards to average 236.7 on the ground and 234.7 through the air, the first season in school history Arkansas has gone for 230-plus in both departments in the same year.

He announced his intention to return for a fourth year at Arkansas on Jan. 6, posting a picture of himself with quarterback KJ Jefferson with the writing, “Looking forward to 2023 with [Jefferson]” and the hashtag #Runitback on social media.

Briles’ current contract calls for a pay raise to $1.25 million in 2023 after he made $1.2 million last year. However, should Briles remain on staff he would be in line for a tidy raise as the highest-paid assistant coach at Arkansas.