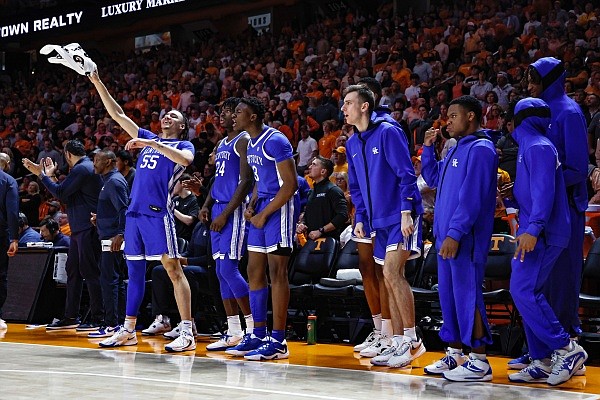 Kentucky players celebrate on the bench during the second half of an NCAA college basketball game against Tennessee, Saturday, Jan. 14, 2023, in Knoxville, Tenn. (AP Photo/Wade Payne)

FAYETTEVILLE — Could Kentucky have gone through a more bizarre 90-hour period last week?

The Wildcats seemed to reach a trough last Tuesday of epic proportions, falling 71-68 at their Rupp Arena home to lowly South Carolina, which had been drubbed at home by 43 points against Tennessee a few days earlier.

Kentucky Coach John Calipari came under great criticism for the Wildcats’ 1-3 record in SEC play, its first league start with that mark since the 1986-87 season, and the embarrassing home loss. Speculation that Texas, which fired Coach Chris Beard following an off-the-court incident with his girlfriend, was interested in Calipari was part of the backdrop of that loss to South Carolina.

Then the Wildcats traveled to Tennessee on Saturday without the services of veteran point guard Sahvir Wheeler (shoulder) and fellow starter Daimon Collins (foot), with the expectation they could have their doors blown off.

Lo and behold, Kentucky upset the Volunteers 63-56 at Thompson-Boling Arena, out-rebounding their hosts 43-23 even while shooting 35.3%.

“We needed to win a game. And to do this here is incredible with all the clutter these kids were dealing with,” Calipari said.

For the first time in program history, an unranked Kentucky team beat a top 5 opponent on the road.

The Wildcats, now 1-4 versus Quad 1 opponents, have a chance to get further back on track this week as they host a pair of games, tonight at 8 Central against Georgia and on Saturday at 1 p.m. against a surprise Texas A&M team that has won four in a row to open SEC play.

League-leading Alabama has destroyed all five opponents it has faced in SEC play, with double-figure point differentials in each game and an average winning margin of 22.8 points.

The latest was the most impressive, a 106-66 rout of LSU on Saturday before a revved-up crowd of 13,474 at Coleman Coliseum.

Earlier in the day, Alabama basketball issued a release saying Darius Miles, who had been dealing with an ankle injury, would be out for the season.

On Sunday, Miles’ situation darkened, as he was charged with capital murder along with another suspect in the shooting death of 23-year-old Jamea Harris on the Strip near campus in Sunday’s early morning hours.

Alabama Coach Nate Oats said he could not comment on Miles’ situation during his Monday news conference, adding, “It’s really a tragedy all around, but especially for Jamea and her family.”

Miles has been kicked off the team and his bio removed from the school’s athletic website.

Alabama (5-0) and Texas A&M (4-0) remain the only SEC teams unbeaten in league play. The Crimson Tide opened 9-0 two seasons ago en route to the regular-season championship.

The projected bracket on Monday for CBSSports.com’s Jerry Palm’s had Arkansas all the way down to a 9 seed as one of six SEC teams among his picks.

The SEC contingent was led by Alabama, his projected No. 1 national seed, and 2 seed Tennessee, and also included 5 seed Auburn, 8 seed Missouri and 11 seed Kentucky.

Florida, which has won three straight after losing four of five, was among his first four seeds left out of the field. Not in the mix for Palm was Texas A&M, which is off to a 4-0 start in conference play.

ESPN.com’s Joe Lunardi, who did his latest bracket update on Friday, will have to do some shuffling after major upsets over the weekend.

He had only five SEC teams included in his latest projection: 1 seed Alabama, 2 seed Kentucky, 4 seed Arkansas, and 7 seeds Auburn and Missouri.

South Carolina followed up its magical road upset of Kentucky by returning home to Colonial Life Arena and falling 94-53 at Texas A&M on Saturday.

The Gamecocks, under first-year Coach Lamont Paris, have lost five games by 19-plus points, three of them at home, a neutral site 85-53 setback to Colorado State in Charleston, S.C., and one on the road, a 79-55 thrashing at George Washington.

South Carolina improved to 3-29 at Rupp Arena after its upset of Kentucky last Tuesday.

Alabama throttled LSU 106-66 on Saturday before a sold-out crowd at Coleman Coliseum. The largest win margin for the Crimson Tide in the series history featured seven three-pointers from freshman Brandon Miller and Jaden Bradley’s one-hand bank-shot three-pointer from half court at the buzzer to set the halftime score at 59-22.

Texas A&M has quietly won its first four games in SEC play after not being involved in conference action on Dec. 28, the opening night in league play.

The Aggies already have two SEC road wins, joining Tennessee and Alabama as league leaders in that department, including Saturday’s 94-53 rout at South Carolina. Texas A&M’s largest winning margin in conference play as an SEC member was highlighted by a 48-16 rebounding advantage.

“If there was one thing that I would speak to that’s helped us be consistent over the last two weeks, it would be the presence that we’ve had on both sides of the ball on the glass,” Texas A&M Coach Buzz Williams said Saturday.

The Aggies have a massive plus 14.75 rebound margin in SEC play, easily leading the league over second-place Kentucky (+7.6) and Tennessee (+7.6).

The Gamecocks are on the opposite end of that stat category at minus-15.25.

Florida’s Colin Castleton and Alabama’s Brandon Miller were honored as SEC players on the week on Monday by the league office.

Castleton, a 6-11 senior from Deland, Fla., was named SEC Player of the Week after he averaged 17 points and 10 rebounds in wins at LSU and against No. 20 Missouri. Castleton scored his 1,000th career point in the win over Missouri and became the first conference player in the 2000s with 16 points, 13 rebounds, 6 assists, 3 steals and 2 blocked shots in a league game.

Ole Miss has floundered for the last month under fifth-year coach Kermit Davis.

The Rebels (8-9, 0-5) SEC will be aiming to snap a six-game losing streak and notch their first conference win tonight at South Carolina, which has lost back-to-back home games to Tennessee and Texas A&M by a combined 84 points.

Former Tennessee star Chris Lofton’s No. 5 jersey was retired as the Volunteers hoisted a banner bearing that number into the rafters at Thompson-Boling Arena during halftime of a 63-56 loss to Kentucky.

In the first rematch of the young conference season (Arkansas at Missouri later in the night will also be a rematch) the Gators get a shot at revenge against one of the SEC’s top surprise teams. The Aggies began their 4-0 start in league play with a 66-63 win at Exactech Arena on Jan. 4. Texas A&M won the earlier game despite being out-rebounded 35-34 and shooting 2 of 16 from three-point range behind 17 points each from Julius Marble, Tyrece Radford and Wade Taylor IV.

“There's nothing I can comment on relative to Darius' situation and the investigation. This is a really difficult situation. We're continuing to support each other as we process this.” — Alabama Coach Nate Oats on Monday after the arrest on capital murder charges of the Tide’s Darius Miles, who is no longer on the team

“The difference in the game was rebounding. They did whatever they wanted to on the boards.” — Tennessee Coach Rick Barnes after Kentucky beat the Vols 43-23 on the glass in a 63-56 victory

“Please go to Texas,” sign intended for Kentucky Coach John Calipari that was held up by a fan, who was escorted out of Rupp Arena during the Wildcats’ 71-68 loss to South Carolina last Tuesday

28 – Home winning streak for Auburn at Neville Arena, second-longest in the country behind Gonzaga (75)