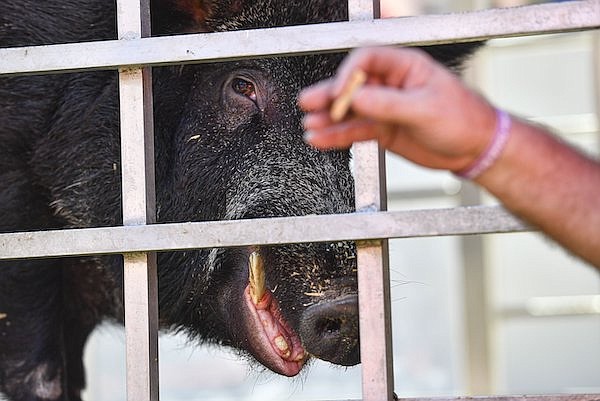 Tusk V is shown during an Arkansas football game against Alabama on Saturday, Oct. 1, 2022, in Fayetteville.

FAYETTEVILLE — The University of Arkansas’ mascot, Tusk V, died Sunday at his habitat in Dardanelle, according to a press release Tuesday from the UA athletics department.

The death was due to natural causes, according to the release. The Russian boar was born in April 2018 and had been in service since 2019 following the retirement of Tusk IV.

Tusk IV, who died in 2020 at the age of 9, bred Tusk V and Tusk VI, who will become the school’s next live mascot.

Chip Stokes, one of the caretakers at the Tusk habitat, said at the time of Tusk IV’s death that the life expectancies for the animals are typically 10-12 years.

The Tusk mascot lineage at Arkansas dates to 1997 when the Razorbacks began having live mascots at football games after a nearly 20-year hiatus. The UA set up a lineage funding program in 2008, and the animals are raised at the Stokes Family Farm in Dardanelle, about 120 miles from Fayetteville.

The Tusk mascots make appearances at Arkansas sporting events, including all home football games, as well as other Razorback-related events throughout the state.

In the 1960s and '70s a number of live mascots were used by the university. In 1977, a mascot named Big Red III escaped an exhibit near Eureka Springs and was shot by a farmer. The following year another live mascot, Ragnar, died in the small South Arkansas community of Leola after a spree in which he killed a coyote, a domestic pig and seven rattlesnakes, according to university records.

CORRECTION: Tusk IV died in 2020. The article originally had the incorrect year.