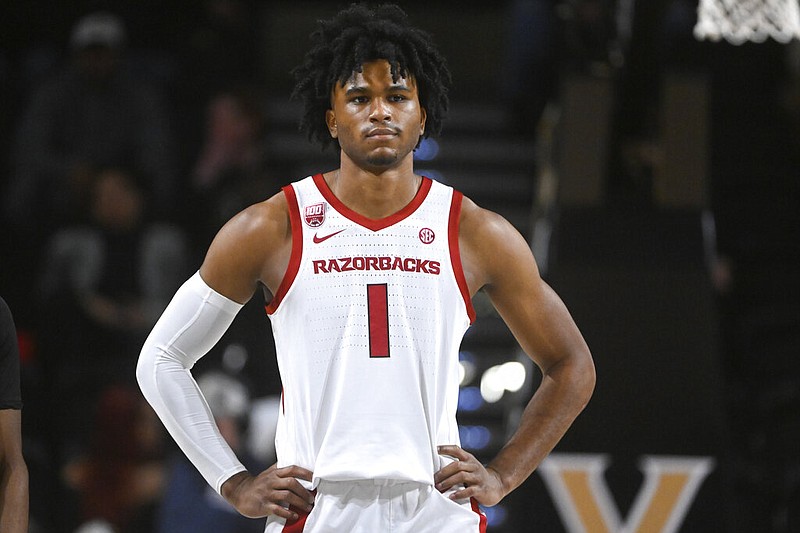 FAYETTEVILLE — The University of Arkansas men’s basketball team changed its starting lineup in each of the previous two games, and don’t be surprised if there’s another switch tonight when the Razorbacks play at Missouri.

Against No. 4 Alabama last Wednesday night at Walton Arena, the Razorbacks went bigger with 6-10 Makhel Mitchell starting in place of 6-6 Ricky Council, who came off the bench.

The next game at Vanderbilt on Saturday, Council was back in the lineup in place of Jordan Walsh.

The Commodores won 97-84 to send the Razorbacks to their third consecutive loss, including Auburn’s 72-59 victory at home over Arkansas.

“You’ve got to continue to tinker,” Razorbacks Coach Eric Musselman said. “You can’t keep doing the same thing as a player or as a coaching staff.

“I think that’s been something that’s been very successful in the past, is continuing to try to figure out who we are.”

The Razorbacks are trying to figure out their best starting lineup and playing rotation with forward Trevon Brazile out with a season-ending knee injury and guard Nick Smith missing a seventh consecutive game — and 13th overall — with a knee injury.

“We spent a whole summer going in one direction, and then unfortunately for everybody are the injuries,” Musselman said. “So [what was done in the] offseason and first eight, 10 games … we’ve lost all that for what this roster is right now.

“So we’re still trying to figure all that out. We’re a sport where we have five players on the floor, and not having two dominant players that we spent a lot of time on has affected the team.

“But our job as players and as a coaching staff is to continue to try to figure out what puts us in the best position to win the game.”

Freshman forward Jordan Walsh, a McDonald’s All-American last season in high school, showed signs of coming on offensively in December, when he had 12 points against Oklahoma, 18 against Bradley and 13 at LSU.

But during the Razorbacks’ three-game losing streak to Auburn, Alabama and Vanderbilt, Walsh is 3 of 21 from the field with a combined eight points in 66 minutes.

Walsh, who has started 15 of 17 games, played off the bench at Vanderbilt and went scoreless in 17 minutes when he shot 0 of 6, including 0 of 3 on three-pointers.

În five SEC games, Walsh is 1 of 17 on three-pointers.

“He’s a really talented player who we believe in,” Arkansas Coach Eric Musselman said. “He’s no different than a baseball player who goes through a slump or whatever you want to call it.

“He’s got to shoot the ball better, obviously. But we’re trying to figure out where and who we can have step in as well.

“Certainly Jordan’s a guy who we believe in and we need him to play better basketball.”

Missouri Coach Dennis Gates had a trivia question when he met with members of the media Tuesday.

The question Gates asked was how many teams have been ranked in the AP poll this season?

“That number will change,” Gates said. “This is the new climate of college basketball.”

Missouri was picked to finish 11th in the SEC preseason poll. But with a roster bolstered by several transfers, the Tigers were ranked No. 20 nationally the past two weeks.

After going 0-2 last week with losses at Texas A&M and Florida, the Tigers dropped out of the AP poll.

It’s the 17th consecutive week the Razorbacks have been ranked going back to last season and 23rd time in the previous 31 weeks.

“When you don’t win, there’s negativity that surrounds [the team], or there’s a cloud,” Razorbacks Coach Eric Musselman said Monday night on his radio show. “And then we wake up, and we’re still 25th.

“There are a lot of programs that would like to be ranked 25th.”

Arkansas was ranked No. 10 in the AP preseason poll after going to the NCAA Tournament Elite Eight the previous two seasons.

“I think because of the success, to be honest with you, that we’ve had the last two years, you gain credibility with national poll people,” Musselman said.

Missouri, which went 12-21 last season under Coach Cuonzo Martin, is still trying to build credibility in Gates’ first year on the job.

Arkansas and Missouri were among 14 ranked teams that lost at least one game last week.

“It let’s you know the climate of college basketball, and let’s you know the growth of each team every year, but also how important it is to take care of the rhythm of your season,” Gates said. “And right now we’re not in that rhythm that allowed us to be voted in.

“Right now we’re voted out and that’s OK. And that’s results. But I’m still concerned about the process.

“Let’s stay in the process and do the things that we know we can do. There’s a lot of basketball left. Two-thirds of a conference season left for each team.”

Eric Musselman said practice Monday was one of the Razorbacks’ better ones this season.

“We didn’t do anything Sunday, so it was good for them to maybe have a day to themselves and not be on their legs and come back fresher both mentally and physically, which I thought they did.”

Arkansas and Missouri are meeting for the second time in two weeks after the Razorbacks beat the Tigers 74-68 at Walton Arena on Jan. 4.

“I think both teams will make adjustments. I don’t think there’s any doubt about that,” Arkansas Coach Eric Musselman said. “I mean, you can’t go in with the same game plan.

“So I think both teams will make adjustments. Players on both rosters will have the film and study different things from an offensive and defensive standpoint and come away with something different.”