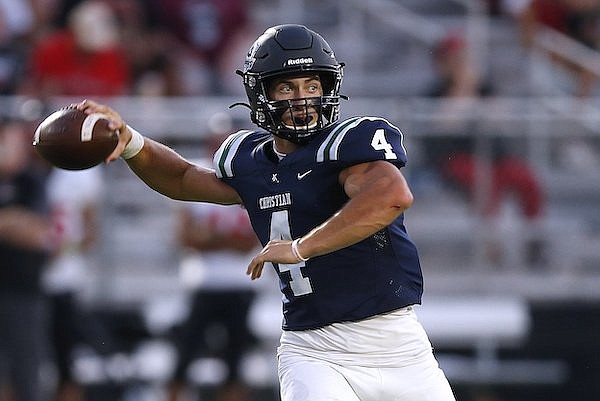 “That kind of surprised me he would come on the first day, but it shows they want me, so that’s kind of promising,” White said. “I like that I know they have their junior day this Saturday, so I’m thinking about making that trip.”

College coaches can't speak to underclassmen during the January contact period, but can watch them work out or check on their academic status.

“It was very special just to show they really want me, and Coach (Sam) Pittman, obviously, he was like, ‘Go check this kid out,' or whatever,” White said. “I don’t know what he was saying, but hopefully good stuff. It’s very special for him to come on the first day. It’s definitely unique.”

ESPN rates White the No. 6 dual-threat quarterback and No. 217 recruit in the 2024 class. He visited Auburn recently and has plans to visit Clemson on Jan. 28.

White had planned to visit Arkansas last Friday and Saturday while his sister was playing in a volleyball tournament in Northwest Arkansas, but she fell ill.

“It was going to be one of those deals where I would kill two birds with one stone and go hang out with Coach (Kendal) Briles, but obviously he’s at TCU now which is cool. I was just going to go see them while I was up there, but Mollie ended up getting sick,” White said. “My mom was out of town and my dad couldn’t make the trip. I know I had the rest of January to make one of those trips.”

He was impressed by Enos' development of quarterbacks after reading an impressive stat.

“I know he has seven NFL quarterbacks — because I saw that stat — that are currently playing in the NFL right now,” White said. “He obviously knows his stuff and he’s been around good quarterbacks, so he knows what it takes to get to the next level.”