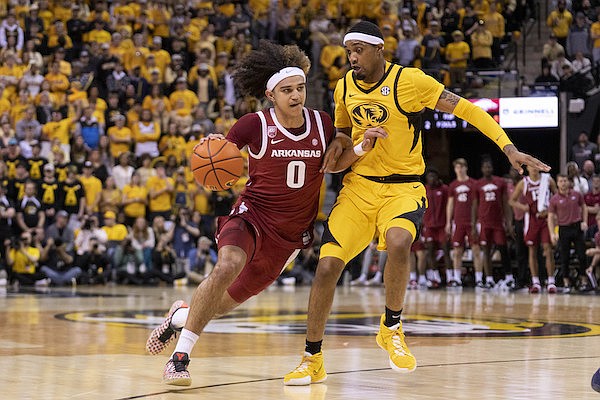 Everything Arkansas basketball wants in 2022-23 is on the other side of hard.

Right now, it is hard for the Razorbacks to win on the road in the Southeastern Conference. They fell to 1-5 in league play Wednesday night following a 79-76 loss at Missouri in which they led by 10 points with 5:07 remaining.

Arkansas’ 1-5 start in the SEC is its worst since the 2008-09 season. Its losing streak is also at four games for the first time since Eric Musselman’s first season in 2019-20.

“I thought our competitive nature tonight was at a high level,” Musselman said. “We’re just a basketball team that has not figured out how to win down the stretch. … We haven’t caught any breaks. Every team’s got to try to create the breaks for themselves.

“Then on the floor trying to keep our composure in close games has got to (improve). All you can do is gain experience through this.”

The Razorbacks are also having a hard time taking care of the basketball. According to KenPom data, they are last in league-only games with a turnover rate of 21.1%.

Arkansas committed 21 against the Tigers, and 14 of them came from primary ball handlers Anthony Black (5), Davonte Davis (6) and Ricky Council (3).

Davis’ six turnovers were a career high. He has 15 turnovers in SEC games, and 11 have come in the Razorbacks’ two games against Missouri.

For Black, his five turnovers matched a season high. He is averaging 4.2 turnovers in the last five games.

Arkansas’ turnovers led to 31 points for the Tigers, who were opportunistic for much of the night. They had 18 points off turnovers in the first half, allowing them to go into halftime down only 35-34.

But the killer for the Razorbacks: Missouri scored 9 of its 13 second-half points off turnovers in the final 4:27 of the game, according to StatBroadcast.

“We turned the ball over. A lot of that is on me,” Black said. “As the point guard and the game manager, with a few minutes and we're up 10, we're supposed to win the game. I take the responsibility for what happened down the stretch.”

Arkansas has found it hard of late to keep opposing teams off the free-throw line. After Alabama and Vanderbilt attempted 36 free throws apiece in wins over the Razorbacks, the Tigers finished with 40 shots at the stripe. They made 30.

Missouri made 21 of 28 second-half free throws, and the Razorbacks had four players, including three starters, foul out of the game. Musselman said freshman wing Jordan Walsh fouling out with 6:48 to go was critical.

According to KenPom data, the Tigers recorded a free-throw rate (free throws attempted/field goals attempted) of 81.6%. It was the highest mark for an Arkansas opponent since March 2014.

The Razorbacks rank last in SEC games in defensive free-throw rate at 50.6%. Auburn is next to last at 44.9%.

“I’ve never coached a team that had four foul-outs before,” Musselman said. “And then you add in the fact, obviously, that you have a player out with a season-ending injury (Trevon Brazile) and another guy that hasn't been with your team (Nick Smith), I mean, you're kind of down six players to close out the game.

“I feel like I've been around a lot, coached a lot. I've never experienced that in all the years that I've been coaching. That is what it is.”

Positives were plenty for the Razorbacks in the loss. Walsh appeared as confident as he had in weeks, freshman guard Derrian Ford provided key first-half minutes, Arkansas made 7 threes and largely owned the glass.

Black was in no way interested in a moral victory.

"We did a lot of stuff better than we've been doing,” he said. “At the end of the day, we have to win. You can say it's a step forward or whatever, but we didn't win, so it doesn't really help us that much.

“We just have to go back to work and figure out how to win on Saturday.”

Arkansas hosts Ole Miss on Saturday at 11 a.m. The Rebels are also 1-5 in the SEC.