Don't count out Smith or Hogs this season 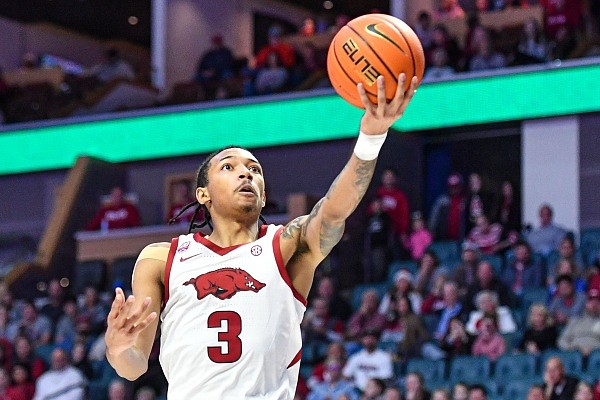 Arkansas guard Nick Smith Jr. (3) shoots a layup, Saturday, Dec. 10, 2022, during the first half of the Razorbacks’ 88-78 win over the Oklahoma Sooners at the BOK Center in Tulsa, Okla.

The Arkansas Razorbacks’ offense was built around 6-10 Trevon Brazile and 6-5 Nick Smith. Both can score inside or out.

Brazile, a transfer from Missouri, is out for the season after knee surgery.

Smith is penciled in to return in February. He’s nursing a knee injury.

Speculation has run that Smith, the No. 1 recruit in the nation last year and a McDonald’s All-American might not come back because he’s a top-five NBA prospect.

Here are three reasons why yours truly believes he will return.

1. This will be his one and only chance in his life to enjoy March Madness. Many NBA players who went straight to the league out of high school have said that is one of their biggest regrets in their career.

3. Nick Smith Sr., his dad, recently said on 103.7-FM, The Buzz, that he believed his son would play for the Razorbacks and that’s he’s working hard to get back in the game.

Smith, who won’t turn 19 until April 18, will make the Razorbacks better on both ends of the court, so don’t count them out of the NCAA Tournament yet.

Speaking of Frank Fletcher, his dream in horse racing has always been to win the Arkansas Derby.

Sure, the Kentucky Derby and other races are more prestigious, but winning on what Fletcher considers his home track is huge.

Well, Fletcher has a contender, maybe his best 3-year-old ever.

Victory Formation went wire-to-wire in the $250,000 Smarty Jones Stakes, winning by three lengths and running the mile in 1:38.14.

Without any prompting from jockey Flavien Prat, Victory Formation was still running strong after a mile.

Fletcher is partners with Spendthrift Farm, and that’s why the horse doesn’t have Rocket in is name.

Fletcher has Rocket in the name of all the horses he owns individually.

Victory Formation came out of the Smarty Jones in good shape.

Analysts consider Victory Formation the second favorite in the Kentucky Derby behind only Forte.

A report in Wednesday’s Arkansas Democrat-Gazette was an eye-opener.

Of the 26 Arkansas football players who opted for the transfer portal, only eight signed with Power 5 schools.

Malik Hornsby, a favorite with some fans, will be competing for the quarterback job at Texas State, where Layne Hatcher was the starter last season.

Hatcher started his college career at Alabama, transferred to Arkansas State for three years before playing with the Bobcats. Hatcher is now at Ball State as a graduate transfer.

Hornsby obviously wanted to play quarterback and nothing else.

For this weekend’s NFL playoffs, all of the home teams are favored.

Saturday’s games have Kansas City favored by 81/2 over Jacksonville, Philadelphia by 71/2 over the New York Giants, and in Sunday’s games Buffalo is favored by 5 over Cincinnati and San Francisco is a 31/2-point favorite over Dallas.

Most of my NBA information comes from Jerry and Etta Webster who attend a lot of Memphis Grizzlies games but make a western trip each year to watch the Los Angeles Lakers and Clippers.

Apparently, 38-year-old LeBron James is having a fantastic year, averaging 30.9 points per game, but it reminds your trusty scribe of Tom Brady, who proved Monday night at 45 that he can still play.

Brady’s team, the Tampa Bay Buccaneers, who started the season with a 19-3 win over the Dallas Cowboys and ended it with a 31-14 loss to the Cowboys, finished 8-10 on the season.

The Lakers are in last place in the NBA Western Conference Pacific Division with a 20-24 record going into Wednesday night.