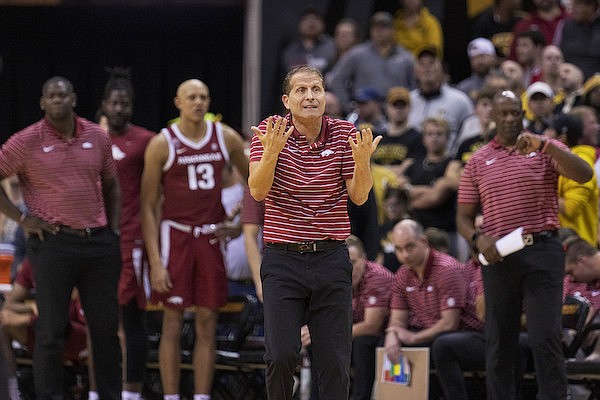 FAYETTEVILLE — The Southeastern Conference on Thursday released a statement that admitted officiating errors were made during the final minute of Arkansas’ 79-76 basketball loss at Missouri on Wednesday.

With 43.7 seconds remaining and the game tied 71-71, Razorbacks guard Davonte Davis was whistled for an offensive foul against Tigers guard D’Moi Hodge.

“When the officials on-site went to review the play, the video replay center incorrectly communicated to them that the play was not reviewable. Therefore, the play stood as called on the floor.”

Davis, who led Arkansas with 18 points and nine rebounds, fouled out on the play.

The Tigers took a 73-71 lead on their ensuing possession after Arkansas’ Kamani Johnson fouled Missouri forward Kobe Brown, who made two free throws. Johnson fouled out on the play and the Tigers did not trail again.

Davis' replacement on the floor, Jalen Graham, committed a crucial turnover with less than 20 seconds remaining that allowed Missouri to extend its lead.

Asked about the game’s officiating after the loss, Arkansas coach Eric Musselman declined to comment directly.

“I can’t talk about the officials,” he said. “I mean, we send stuff in (to the league office). We’re kind of tired talking about it. I give Missouri credit. They beat us.”

"Not the WIN we wanted, but I appreciate the diligence and accountability from my colleagues in SEC office," Yurachek wrote.

The SEC said its collaborative replay process between on-site game officials and a command center at the league office in Birmingham, Ala., has existed since 2017.

"All on-court and replay officials are evaluated on an ongoing basis,” the SEC statement read. “Performance evaluations are used to determine game assignments, SEC Tournament and post-season tournament assignments. The SEC continues to evaluate, refine and improve the SEC officiating process.”

Arkansas fell to 12-6 overall and 1-5 in SEC play on Wednesday. The Razorbacks are scheduled to host Ole Miss on Saturday at 11 a.m.