Enos contract for up to 5 years 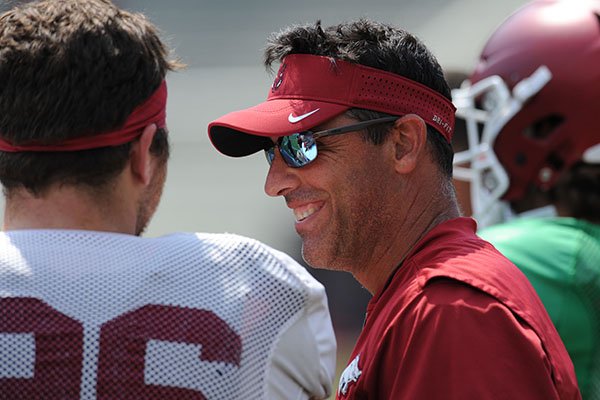 Arkansas offensive coordinator Dan Enos speaks Saturday, Aug. 5, 2017, with linebacker Karl Roesler prior to the start of a scrimmage in Razorback Stadium in Fayetteville.

FAYETTEVILLE — Arkansas offensive coordinator Dan Enos signed a three-year contract with the Razorbacks that can be extended for up to two additional years.

Enos will be paid an annual salary of $1.1 million in 2023 and has built-in pay raises of $75,000 for each subsequent year, according to his contract that was obtained through a Freedom of Information Act request. Enos’ contract will automatically renew for one year in February 2024 and February 2025 unless he is notified in writing by Dec. 31 that his contract will not be extended.

Under terms of the contract, Enos would be in line to make $1.4 million if he is still Arkansas' offensive coordinator for the 2027 season.

Enos was hired Thursday to replace Kendal Briles, who was announced as TCU’s offensive coordinator. Briles has spent the past three seasons at Arkansas.

This is Enos’ second stint at Arkansas. He was the Razorbacks’ offensive coordinator from 2015-17 and has since coordinated offenses at Miami in 2019 and Maryland the past two seasons. Enos also worked as a position coach at Alabama in 2018 and Cincinnati in 2020.