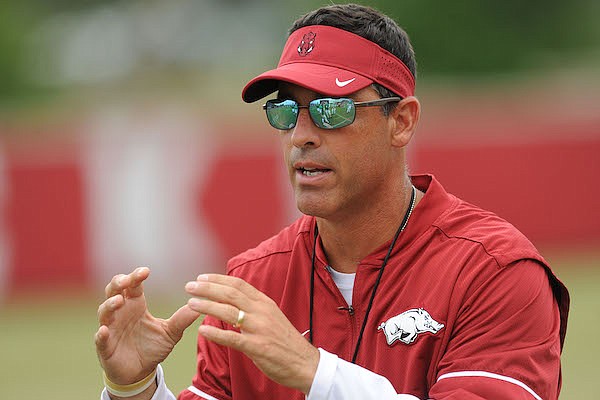 Arkansas offensive coordinator Dan Enos speaks to his players Tuesday, Aug. 1, 2017, during practice at the university's practice field in Fayetteville.

UA officials posted the official announcement of Enos rejoining the football program as offensive coordinator on Thursday morning, before TCU could make official that it had hired Kendal Briles away from the Razorbacks later in the day.

Pittman also made a personal Twitter post with the news: “Great to have Dan Enos back in Fayetteville. So honored he wanted to be a part of this Great University again!” Pittman referred to Enos as a “QBwhisperer” in his post.

Enos, 54, immediately was on the recruiting trail for the Razorbacks on Thursday morning, showing Pittman was ready to make the move swiftly after news broke on Wednesday that Briles had accepted an offer to join Coach Sonny Dykes at TCU.

Enos had been the offensive coordinator at Maryland for Coach Mike Locksley the last two seasons, his fourth stop since departing with the Bret Bielema staff at Arkansas after 2017.

Enos, a three-year offensive coordinator with the Hogs from 2015-17, overlapped with Pittman’s UA tenure as offensive line coach (2013-15) for one season, when Arkansas produced one of the best offensive units in school history.

Those 2015 Razorbacks, with Brandon Allen as a third-year starting quarterback, broke the school record with 62 touchdowns while averaging 35.9 points, the sixth-highest total in school history, 268.2 passing yards and 197.3 rushing yards. The team’s 6,051 total yards that season rank third in school history behind the record 6,273 yards posted in 2010 and 6,128 yards this year.

Alex Collins rushed for 1,577 yards in 2015, the highest total for any Arkansas back not named Darren McFadden and the third-highest single-season mark in school history. Allen passed for 3,440 yards and 30 touchdowns.

The following season, Austin Allen passed for 3,430 yards with 25 touchdowns and Rawleigh Williams rushed for 1,360 yards.

Arkansas was one of only two FBS programs in 2015-16 to feature separate duos who were 3,000-yard passers and 1,300-yard rushers those years.

“I personally love it,” Austin Allen said Thursday of Enos re-engaging with Pittman. “You saw what they did that 2015 year when they worked together. That offense was explosive, balanced, had talent.

“The way they worked together meshed really well. I think they knew that at the time and eight years later something came about and they were able to make it happen again.”

Allen said the Razorbacks began adding in some run-pass option principles in Enos’ pro-style attack during his junior and senior years and he noted Enos’ offenses at Maryland showed that evolution.

“You look at that Maryland tape and they’re multiple,” he said. “Not really that much under center, but Pistol, [Shot] Gun, a lot of motion shifts, play-action and then also have that RPO game as well.”

“Hell of an offensive mind & one of the best QB developers in the game,” Stoerner wrote. He added, “This is huge for the [Razorback] QB room” tagging quarterbacks KJ Jefferson, Jacolby Criswell and signee Malachi Singleton.

Enos has worked with both of the Tagovailoa brothers. Maryland’s Taulia Tagovailoa passed for 3,008 yards and 18 touchdowns and completed 67% of his passes this season to earn second-team All-Big Ten honors from league coaches.

As associate head coach and quarterbacks coach at Alabama in 2018, Enos worked with Tua Tagovailoa, who broke the FBS single-season passer rating record (199.44), while passing for 3,966 yards and 43 touchdowns with a 69% completion rate. Alabama averaged 45.6 points and 522 yards in total offense the year while breaking school records with 684 points, 7,830 total yards and 4,854 passing yards.

Criswell, a Morrilton High graduate and North Carolina transfer, addressed Enos on Twitter, writing, “Excited to get to work with you, and get this thing rolling.”

Razorbacks who played during Enos’ first stint weighed in with their thoughts in the comments below the post announcing his official hiring.

Former Arkansas running back Kody Walker texted a picture of a goat on the thread.

“I like it,” added former Hog defensive lineman Bijhon Jackson.

Ex-Arkansas offensive lineman Johnny Gibson wrote: “The biggest [Enos] quote that I tell my players is “potential and 2 bucks can get you a cup of coffee.’ I catch myself telling my best players this when they fail to work hard. Pittman and Enos back together is [good].”

Briles will owe Arkansas a buyout for leaving for a non-head coaching position before the end of his contract, which was set to run through February 2025.