Gym'Backs look to bounce back on bars 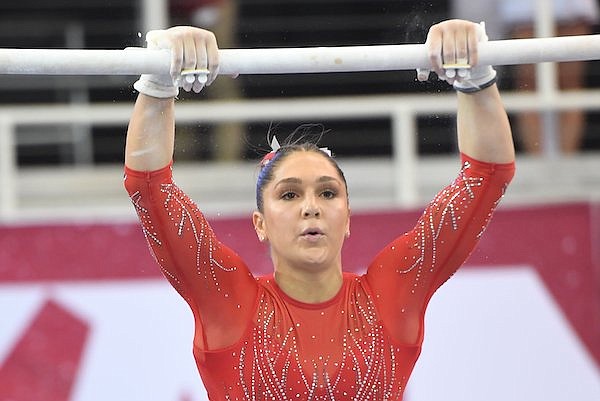 Arkansas' Jensen Scalzo competes Friday, Jan. 13, 2023, in the bars competition of the Razorbacks' meet with Alabama in Barnhill Arena in Fayetteville.

FAYETTEVILLE — University of Arkansas gymnastics will return to the scene of one of the greatest triumphs in program history tonight at 7:30 Central with a visit to Auburn’s Neville Arena.

On this site two years ago, the Razorbacks soared to a school-record score of 197.425 to defeat the Tigers by three-tenths of a point.

A few items weigh against the Razorbacks (1-1, 0-1 SEC) in trying to duplicate that feat against Auburn (1-3, 0-1 SEC) in today’s meet, which will be broadcast live on the SEC Network.

Neville Arena is sold out after being limited to about 1,000 patrons for the Arkansas win in the 2021 regular-season finale during the covid-19 spell. Additionally, the Razorbacks have not won a dual meet or tri meet against SEC competition since that night, as they have dropped eight in a row.

Finally, Arkansas senior Kennedy Hambrick, who excelled with a 39.7 all-around score that night, just .05 shy of her school record, is still working to find her form this season. She has not competed on the two bigger “leg” events, the vault and floor, and was one of three Razorbacks who had falls or major errors on the uneven parallel bars last week, when that event alone prevented Arkansas from knocking off Alabama.

Fourth-year Arkansas Coach Jordyn Wieber said she’d for sure be thinking about that huge road score when the Razorbacks hit the floor tonight.

“The biggest thing we want to make sure we talk to the team about and keep in our minds is the last time we went to Auburn there was probably 1,000 people in the audience because of covid,” Wieber said.

“All we can do is block out the distractions, stay in our bubble and stay really tight and just be mentally tough. … It’s going to require that going into Auburn.”

The Razorbacks had quality scores on the balance beam (49.325) and the floor exercise (49.35) at Barnhill Arena last week and hit their vault landings while posting a 49.15 on that event. The bars were another story, as falls from Hambrick and freshman Cally Swaney in the leadoff position, and a major error from freshman Reese Drotar, who went up second, forced Arkansas to count Hambrick’s 9.1 and Drotar’s 8.975.

Arkansas will enter tonight’s meet ranked No. 45 on the bars with an average score of 48.4.

Wieber said all the Razorbacks hit on their bar routines in practice the day prior to the Alabama meet and the coaching staff has added simulated pressure during the week to steel up their performances.

“My message to the team was to just reset,” she said. “Reset to what you know you’re capable of. We don’t have a problem that needs fixing. We just need to dial in our mental toughness a little more.”

Auburn’s 1-3 record is deceptive. The Tigers have scored better than 197 in both of their meets under 13th-year Coach Jeff Graba, but were matched against powerhouses Oklahoma and Michigan in their opener at the Super 16 Challenge in Las Vegas, and fell at Florida last week.

The Razorbacks are led by seniors Hambrick, Bailey Lovett and transfer Norah Flatley, who won the all-around with a 39.575 last week.

Arkansas freshman Lauren Williams won the floor exercise with a 9.9 last week, while Flatley and Lovett placed second. Swaney and freshman Cami Weaver each scored 9.875 behind Flatley’s winning 9.9 on the beam, while Scalzo and Flatley tied for the bars title at 9.9, and Weaver, Williams and Makenzie Sedlacek all had 9.825s to tie for second on the vault behind Flatley’s 9.9.

Auburn is led by former Olympian Suni Lee, whose 39.638 all-around average ranks fifth in the country, just ahead of Flatley (39.575) in eighth. Tigers senior Derrian Gobourne is fourth on the vault (9.925) and seventh on the floor exercise (9.925).

Lee and Arkansas assistant coach Kyla Ross are the only female gymnasts with Olympic, World Championship and NCAA gold medals.

No. 25 Arkansas gymnastics at No. 7 Auburn

WHERE Neville Arena in Auburn, Ala.