Texas back set to visit Smith at Arkansas 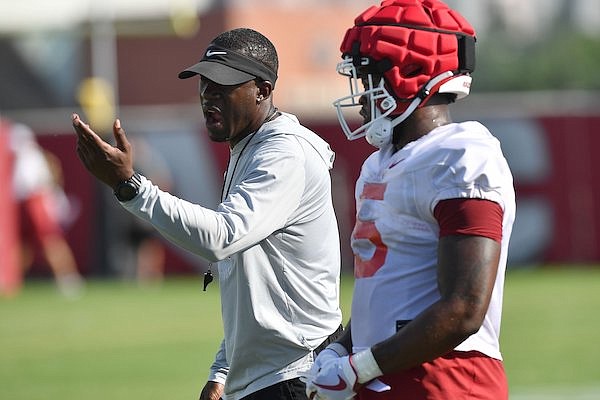 The University of Arkansas is expected to to host numerous top football prospects the next two Saturdays and 4-star junior running back Nate Palmer is planning to visit Jan. 28.

“I feel like Arkansas is one of my top schools, so I just feel like I need to go visit them and build that relationship and see what I can see and see how I feel,” Palmer said.

Palmer rushed 328 times for 2,250 yards, 25 touchdowns and had 30 receptions for 308 yards and 8 touchdowns as a junior. He was named District 8-5A D-I Co-Offensive Newcomer of the Year as a sophomore at College Station High School after rushing for 897 yards and 9 touchdowns on 120 carries.

Palmer explained why he’s high on the Hogs.

“I feel like it’s a great school and has a great coach,” Palmer said of Arkansas running backs coach Jimmy Smith. “I feel like he can build me and take me to that next level.

“I feel like Arkansas is RBU because all these top running backs have gone through Arkansas and had done great in the NFL, and that could be me in the next few years.”

Palmer said he attended games at SMU and TCU in the fall. His upcoming trip to Fayetteville is the only visit he has planned so far for this month.

He said he and Smith communicate every day and that communication has helped them form a nice bond.

“He’s a very down-to-earth coach,” Palmer said. “I feel like he connects with me on so many levels. I just feel like we have that relationship going and I feel like he can guide me in my college career for the next three years and develop me into a man and also a great football player and take me to the NFL.”

Palmer has a 3.4 grade-point average and is considering kinesiology or business as a major.