What to watch for in Arkansas-Ole Miss 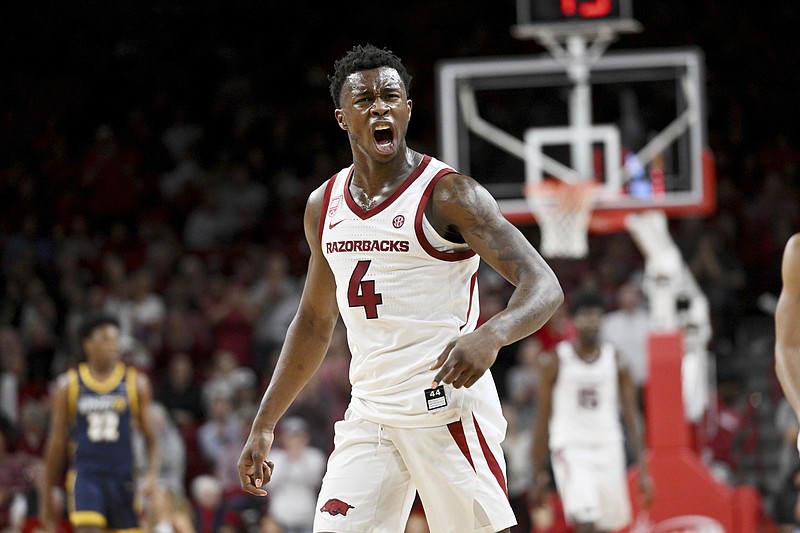 Here are a handful of things to watch for:

Miller, who did not take a shot from the field in the first half at Arkansas, scored an SEC-low 14 points, but he did get loose late for the game’s two biggest scores. And Green finished with 19 points, including seven on Davis early.

His next task is likely to be Ole Miss guard Matthew Murrell, a 6-4 junior who is the clear go-to option for the Rebels.

Murrell is averaging 15.5 points in SEC play on 13.8 field goal attempts. The guard has been most effective against conference competition operating inside the arc, where he has finished 20 of 36 looks.

His overall efficiency is brought down by an 11-of-47 mark from three-point range. Murrell, though, did shoot his way out of a perimeter funk earlier this week by making 5 of 11 threes in Ole Miss’ win at South Carolina.

“Murrell is a really good scorer,” Razorbacks coach Eric Musselman said Wednesday. “He’s got three-point range. You’ve got to chase him off screens with the high hand before the catch. You’ve got to locate him as he comes across half court. Can’t give him any air space. All those things are themes.

“He’s one of the best scorers in the SEC.”

When engaged, Davis is one of the best defenders in the league, so the matchup could be entertaining.

In SEC play, opponents are 13 of 27 (48.1%) from the floor when Davis is the nearest Arkansas defender to a shot. The percentage may come as a bit of a surprise, but the junior has been terrific in limiting field goal attempts.

“He’s just done an insanely incredible job of just kind of taking one guy out of the game,” Musselman said prior to Arkansas’ loss at Missouri. “Maybe that’s decreased his steals because we’re just asking him to limit these guys’ touches even.”

It is not breaking news that perimeter shooting has largely been a struggle for Arkansas in SEC play.

The Razorbacks enter the weekend 13th in three-point percentage at 26.2%. But they have shown signs of life in the last two games, knocking down 14 of 35 (40%) looks at Vanderbilt and at Missouri.

It is their best two-game run beyond the arc since making a combined 16 threes against Louisville and Creighton at the Maui Invitational.

Black, from a facilitating standpoint, has greatly aided Arkansas from three-point range in league games. The Razorbacks are 12 of 29 (41.4%) from deep immediately following a Black pass.

He assisted on three made threes both at LSU and in the first meeting against Missouri. He then assisted on 4 threes in Wednesday’s loss to the Tigers.

In the last two games, the Razorbacks are 5 of 10 on threes set up by Black, and the guard is 3 of 7 beyond the arc himself.

We are beginning to see that a bit with Black.

The Razorbacks do not want or need to settle for perimeter jumpers. Musselman has been adamant about getting the ball into the teeth of defenses for close-in looks and perhaps trips to the free throw line.

But a Black-created three has been one of Arkansas’ best shots.

Freshman wing Jordan Walsh fouling out Wednesday against Missouri was a game-changer.

Following the loss, Musselman said not having him available down the stretch was crucial as the Razorbacks let another 10-point lead slip away on the road. Arkansas outscored the Tigers 31-18 when he was on the floor.

According to HoopLens lineup data, the Razorbacks scored 1.47 points per possession in Walsh’s 19 possessions versus 0.92 PPP in the 52 in which he sat. They also allowed 0.88 PPP in his 17 defensive possessions and 1.19 PPP in 54 trips with Walsh off the floor.

He finished with 12 points on 4 of 4 from the floor, including 2 of 2 beyond the arc. His first triple snapped a string of 11 consecutive misses from deep dating to the SEC opener at LSU.

The freshman’s biggest hurdle to this point has been foul trouble.

Without question, he has been on the receiving end of a few tough-luck whistles. But he has picked up 2 first-half fouls in 4 of 6 SEC games, including the last 3.

KenPom data shows that Mitchell is No. 9 in league-only games with a block rate of 6.4%. His 9 blocks lead the team, and he is averaging a solid 8.3 points and 8 rebounds per game.

Mitchell’s rim protection and his presence around the restricted area could loom large Saturday. Ole Miss, according to Hoop-Math data, has the sixth most scores at the rim (252) among SEC teams this season on the fourth most attempts (431).

Akwuba has played only 8 minutes in the Rebels’ last 2 games, but he blocked 4 shots against Alabama and 5 against Auburn. McKinnis has three multi-block games under his belt inside the conference, including three in losses to Alabama and Georgia.