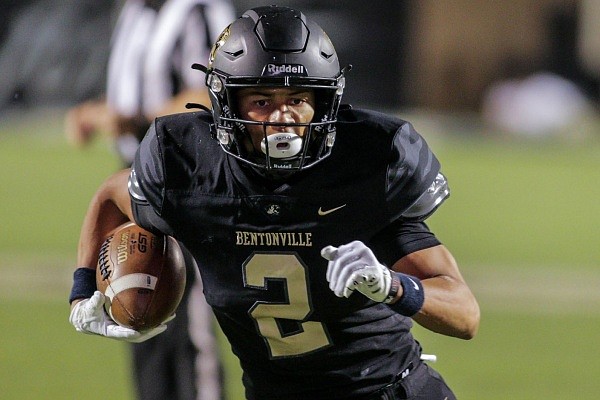 Bentonville Tigers junior CJ Brown catches a pass and runs in for a touchdown during the Fayetteville vs. Bentonville football game, October 14, 2022, at Tiger Stadium in Bentonville. (Special to NWA Democrat-Gazette/Brent Soule)

Bentonville junior wide receiver CJ Brown left his Arkansas visit on Saturday with an offer from the Razorbacks.

Brown, 6-1, 180 pounds, had offers from Louisville, Colorado State and Purdue before his trip to Arkansas for Prospect Day.

“Great coaching staff that I think is very special with a bunch of good guys to be around,” said Brown, who attended the Razorbacks’ home game against LSU in November. “Made me feel at home, which is something I was hoping would happen, because I live 20 minutes down the road.

“Overall, great experience and I’ll definitely be back soon.”

He had 75 catches for 1,284 yards and 16 touchdowns last season, earning first-team 7A-West All-State honors. Brown had 31 receptions for 436 yards and 5 touchdowns as a sophomore.

“CJ had an excellent junior season,” Tigers coach Jody Grant said. “He was most definitely one of the top receivers in the state. Had 75 receptions and set our single-season receiving yards record this year. All this while often being double teamed.

“Also a dangerous threat in the return game. Most importantly, a great teammate.”

Brown is the eighth in-state prospect in the 2024 class to receive an offer from Arkansas.