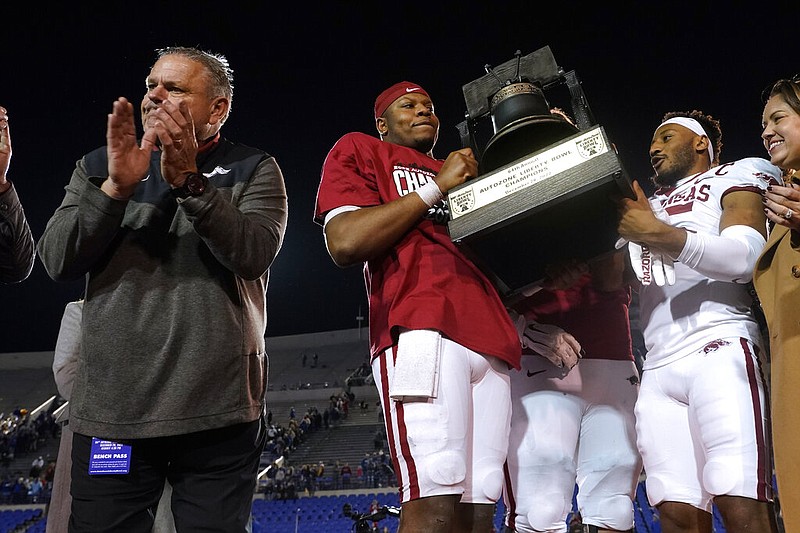 Arkansas hosted some of the best young talent in the nation for Prospect Day on Saturday, and feedback from recruits was promising for the Razorbacks.

Gray, 6-6, 295 pounds, of St. Louis Hazelwood Central, has offers from Arkansas, Tennessee, Oregon, Louisville, Iowa, Missouri, Washington and other programs. He and some teammates visited the Razorbacks for Prospect Day.

“I love how all the attention in Arkansas is focused on Razorback football and how outside of football you can still make a living going to Arkansas from all the connections the school has,” Gray said.

Freshman defensive back Blaine Bradford, 6-1, 180, of Baton Rouge (La.) Catholic, had offers from LSU, Tennessee, Texas A&M, Florida State, Penn State and Mississippi State prior to his visit to Arkansas. He left with an offer from the Razorbacks.

“It was a great experience being my first,” he said. “I enjoyed that they were straight up about who they were as a program and how they spoke from both the business and family side of things. I also enjoyed the atmosphere.”

He and his father were impressed with co-defensive coordinator and defensive backs coach Marcus Woodson.

More from WholeHogSports: Our coverage of No. 25 Arkansas' 69-57 win over Ole Miss on Saturday

“Coach Woodson was open with my dad and I from the jump,” Bradford said. “My dad and him knew some of the same people and we were able to make an immediate connection.”

Fort Smith Southside junior offensive lineman Kobe Branham enjoyed his time at Arkansas. The facilities were one of several highlights.

“Getting to tour the facilities and hear from coaches at all positions,” he said. “Getting to hear their take on what makes Arkansas a standout program. Arkansas will always be up on my list even though it’s still early. I’m a hometown Arkansas kid that grew up watching the Hogs.”

Branham, 6-6, 320, was recently offered by Texas A&M and has been asked to attend an Arkansas camp this summer so Razorbacks offensive line coach Cody Kennedy can get a close look at him.

“Coach Kennedy is a great coach and getting 1-on-1 time with him was amazing,” he said. “I will be in College Station next weekend, with more visits to be scheduled at other colleges soon.”

Class of 2025 quarterback Grayson Wilson also visited and had left happy that he did.

He has the attention of the Razorbacks' baseball coaches.

“I got to meet Coach (Dan) Enos,” Wilson said. “I learned a lot about the student-athlete’s day-to-day life. The weight and training facilities, the nutrition center, the academic center and the support available to student-athletes gives an athlete everything that they need to succeed.

“After touring the facilities and eating in the nutrition center, we watched the Hogs’ basketball game. We ended the visit with a photoshoot and I got to see the locker room. Overall, it was a great visit and I had a really good time.”

Class of 2024 athlete Brandon Mason, 6-5, 240, of St. Louis Hazelwood Central, liked how the entire state focuses on the Razorbacks.

Mason, who is drawing interest from Arkansas, Missouri and other schools, said the photoshoot and the Arkansas-Ole Miss basketball game stood out.

“I can tell a lot goes into the sports in Arkansas. They really take pride in making sure that the sports programs are top notch,” he said.

Freshman defensive back Keenan Jones, 6-1, 194, of St Louis University High School, made his second trip to Fayetteville on Saturday.

“It was great. Got to meet new guys and had fun,” said Jones, who attended the Razorbacks’ football victory over Ole Miss in November. “The stadium and the academics and coaches (stood out).”

Jones has offers from Arkansas, Missouri, Tennessee, Nebraska and other schools.