Auburn holds off Arkansas at home 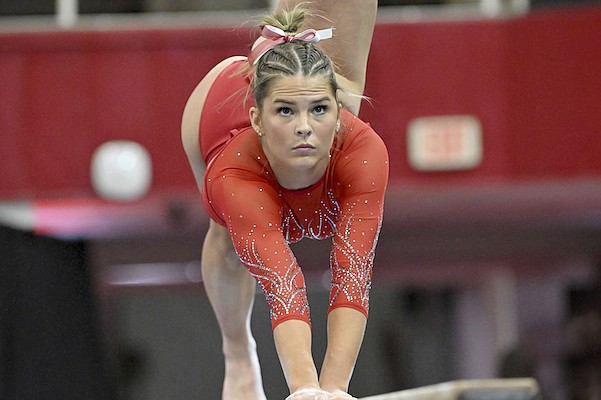 Arkansas gymnast Cami Weaver competes on the beam against Alabama during an NCAA gymnastics meet on Friday, Jan. 13, 2023, in Fayetteville. (AP Photo/Michael Woods)

The No. 25 University of Arkansas gymnastics team bounced back from a rough bars routine last week and gave No. 8 Auburn a good run on the road before faltering in the final routine on Friday.

The Razorbacks (1-2, 0-2 SEC) had been on track to blow past 197, as they had in their last outing at Neville Arena with a school-record 197.425 two years, but had to settle for a season-high score when three consecutive athletes scored poorly on the beam in the 2-through-4 spots. Arkansas lost its ninth consecutive conference dual or tri meet, dating back to its win at Auburn in the 2021 regular season finale.

Auburn sophomore Suni Lee was the star of the meet, claiming the all-around title with a 39.75, buoyed by an event-winning 9.975 on the floor exercise. The Olympic gold medalist also claimed the titles on the vault (9.95) and bars (9.975).

Arkansas redshirt freshman Cami Weaver, unfazed by the three shaky routines that preceded her, nailed a 9.95 with a stuck dismount in the fifth position on the beam to win that event in her home state.

The Razorbacks, who had three falls or major errors on the bars in a winnable meet against Alabama at Barnhill Arena last week, faced down that hurdle in the opening rotation and came through with a team score of 49.225 that included no scores lower than a 9.8. Senior Norah Flatley led the way with a 9.9, while freshmen Cally Swaney (9.825) and Reese Drotar (9.8) overcame their big errors from last week.

Auburn held a lead of 0.05 after one rotation and a full tenth of a point after two.

The Razorbacks scored 49.325 on vault, paced by freshman Frankie Price’s 9.9, and a 49.3 on the floor exercise, with Bentonville freshman Lauren Williams tying Flatley at 9.9.