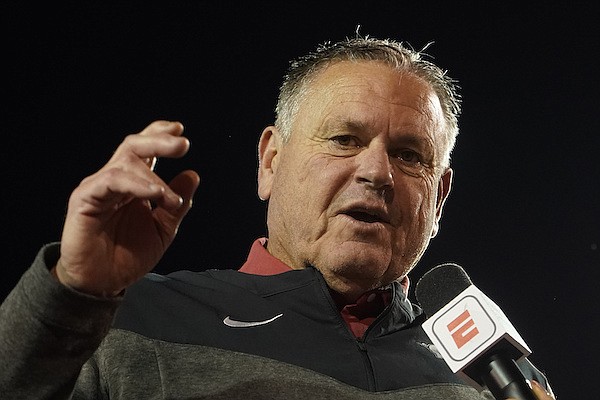 The 14th annual Arkansas Football Coaches Association Ronnie Roach Coaching Clinic in Hot Springs on Feb. 3-5 will continue the strong tradition of outstanding speakers with University of Arkansas Coach Sam Pittman being one of them.

While the NCAA recruiting dead period for college football begins Jan. 30 and lasts until Feb. 28, Pittman and his staff will be in Hot Springs to continue building relationships with the more than 1,000 high school coaches from Arkansas and the region.

Danny McCuin, who has been the director of the clinic since its inception, said Pittman has emphasized how much he and his staff want to help with the clinic.

“Sam has been phenomenal for us,” McCuin said. “He sat down with me last year and told me, ‘We’ll always be a part of this. We want to help anyway we can. If you need anybody on my staff for anything, all you have to do let me know.’

“In our conversation, he said, ‘I have to know all the high school coaches and they have to know us and if we can help them that helps us recruit their kids.’ ”

The first clinic in 2010 drew about 125 coaches and has grown to be one of the largest in the region, in part because of the quality of speakers.

Siloam Springs Athletic Director Jeff Williams, who was the head coach at El Dorado, Fort Smith Southside and Pea Ridge prior to his current position, is in charge of lining up speakers.

“He [took] over getting the speakers for us four years ago and if you know Jeff Williams, he’s not afraid to call and ask anybody whether he knows them or not,” McCuin said. “He’s done a phenomenal job.”

Pittman will speak Friday, Feb. 3 at 8 p.m., while former Razorback and current Air Force assistant Tim Horton will speak at 7 p.m.. Mental health expert Rachel Baribeau will speak prior to Horton and Pittman

“She speaks to NFL, NBA teams and big D-I schools on how we need to be concerned with the mental health and what the coaches need to be aware of,” McCuin said.

The Arkansas position coaches will have breakout sessions for high schools coaches to attend after Pittman talks.

“We’re going to have it where coaches can just share ideas [and] topics, like screens, play-action passing,” McCuin said.

Friday will also feature a retired coaches social gathering before the evening speakers.

Buck James of Bryant, Brad Bolding of Little Rock Parkview, Anthony Lucas of Pulaski Academy, J.D. Plumlee of Malvern and Ricky May of Charleston — who all led their teams to state championships last season — will speak Friday morning.

Dilfer was a high school coach in Tennessee before being hired by the Blazers in late November.

“I was thinking we’re probably going to lose him, but Jeff called him again and he said, ‘Coach, I committed to you guys. I’m still honored to come,’ ” McCuin said.

“It’s really the time of the year where coaches get re-energized for the upcoming season,” Coleman said. “You get similar minds in a building talking about the sport they love. it gets you fired up for spring ball and upcoming season.”

The clinic allows foes to get to know one another and form relationships beyond the gridiron.

“I love my profession and getting together with other guys from the same profession and being buddies and friends and just shooting the bull and talking ball,” Coleman said.