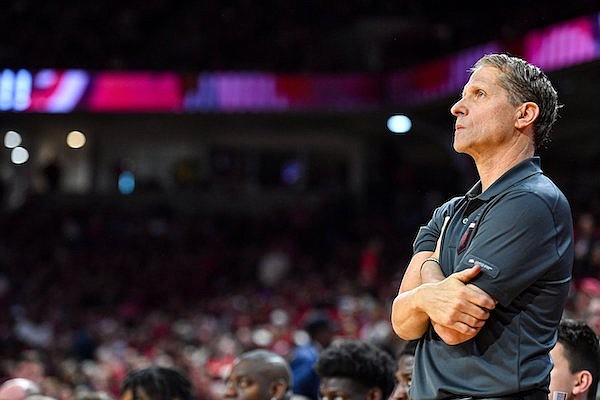 Arkansas coach Eric Musselman is shown during a game against Ole Miss on Saturday, Jan. 21, 2023, in Fayetteville.

FAYETTEVILLE — Three days after sloppy ball handling played a central role in a road loss at Missouri, the University of Arkansas took much better care of the ball in Saturday’s 69-57 win over Ole Miss.

The Razorbacks committed 11 turnovers at Walton Arena after having a season-high 21 in the 79-76 loss at Missouri, leading to a 31-13 advantage in points off of turnovers for the Tigers.

Conversely, Ole Miss had 17 turnovers against the Hogs, leading to a 15-6 edge for Arkansas in points off turnovers, marking the second SEC game the Razorbacks have outscored opponents in that category.

“I thought in the second half defensively holding Ole Miss to 37%, [it was] defensive activity with steals,” Arkansas Coach Eric Musselman said. “We were kind of doing what we do, which is create offense through our defense.”

Arkansas has had double-figure turnovers in its last nine games, with its low in SEC play being 10 in the league opener at LSU.

Freshman Jordan Walsh said Musselman and his staff having been harping on better ball security.

“We’ve gone through practice … knowing, yeah, they’re going to slap and foul and reach for the ball, so you’ve got to be extra secure,” Walsh said. “Like we’ll dribble through lines with like 12 people on each side to slap you, hack you. It was something like you had to get used to it and fight through it because the refs ain’t going to give you nothing so you might as well be tough.”

Added Arkansas guard Davonte Davis, “Like Jordan Walsh said, the refs are not always on our side. We know that. So it’s fine that we turn it over a few times. We’ve got a young team. I think as the season goes on it will continue to happen like it was today, not as many.”

The Razorbacks tied their highest total of threes on the season, having made eight against Louisville and Creighton in Hawaii and 8 of 13 (61.5%) in a 99-58 win over San Jose State on Dec. 3.

Davonte Davis hit 3 of 5 three-pointers, while Joseph Pinion made 3 of 6 and Jordan Walsh 2 of 4 with the rest of the team at 0 for 5.

“Then certainly when we’re able to make threes, like Jordan Walsh did today and obviously Joseph Pinion,” Coach Eric Musselman said on the Razorback Sports Network. “Those two guys in particular, their three-point shots kind of opened up dribble-drive angles for other people.”

Arkansas freshman Jordan Walsh was called for just one foul after fouling out on Wednesday at Missouri and drawing 22 in the first six league games.

A reporter asked Walsh about his recent play, with 13 points against the Rebels and 12 at Missouri after a non-scoring game at Vanderbilt, then tacked on a question about his low foul count.

“I knew somebody was going to say something about fouls,” Walsh said, smiling. “Yeah, the foul thing has gotten out of hand. They started doing an over-under on my fouls, like within the staff. It’s actually funny.

“They’re like, ‘You’re at 4 fouls: Over-under?’ I’m like, yo, come on. But it feels good to be able to turn that corner and feel like you’re really affecting the team in a positive way and affecting winning in a positive way. I’m just glad I was able to do it and I hope I can keep doing it.”

Ole Miss star Matthew Murrell injured his right knee while planting to go up for a shot in transition early in the second half. Murrell had his right foot inadvertently stepped on by Davonte Davis as he rose up.

Murrell stayed crumpled on the Rebels’ baseline as Davis corralled the loose ball and fed to Anthony Black on the other end for a dunk at the 14:15 mark and a 43-31 Hogs’ lead. Murrell stayed down a while and did not return after going 1 for 5 for 3 points and no rebounds in 24 minutes.

“He’s the star player,” Davis said. “We try to do whatever it takes to not let him score.”

Arkansas forward Makhel Mitchell was escorted to the locker room midway through the second half after contributing 4 points on 1-of-1 shooting, 5 rebounds, 2 steals, 2 blocks and an assist.

Mitchell, who did not return to the game, was wearing a medical boot on his right foot on the Arkansas bench.

Coach Eric Musselman said Mitchell would be undergoing X-rays to check on the injury Saturday afternoon.

Arkansas won its fifth in a row in the series and nine of the last 10 against Ole Miss.

Eric Musselman improved to 4-0 against the Rebels at Arkansas. Ole Miss Coach Kermit Davis dropped to 1-5 against the Hogs.

Arkansas guard Joseph Pinion, fresh off scoring a layup soon after entering the game, missed a point-blank shot moments later on the break after faking a defender into the air. He rebounded the miss, which would have extended the Hogs’ lead to 28-25, but his short layup was then blocked by Theo Akwuba as Ole Miss took control.

The freshman atoned for the gaffe with back-to-back three-point makes from the left corner, on feeds from Anthony Black and Mekhi Mitchell, to grow Arkansas’ lead to 32-27 with less than a minute left in the half.

The 6-5 Morrilton High product matched his season high with 13 points on 5-of-10 shooting with 5 rebounds. Pinion has scored 13 points in both of Arkansas’ SEC wins.

Ole Miss used pick and rolls, give and gos and straight one-on-one takes to net a series of dunks against the Arkansas defense.

In the first half, five of the first 11 Ole Miss baskets came on dunks, including a beautifully executed pick-and-roll lob from James White to Jayveous McKinnis for a power jam and a 25-24 Rebel lead.

Myles Burns had a fast-action dunk on a well-run give and go from Robert Allen for a 17-13 Ole Miss lead.

Matthew Murrell had a straight-line take for a dunk, and McKinnis Myles Burns also had throw downs for the Rebels.

After going 23 of 26 from the free throw line for a season-high 88% against Missouri, Arkansas fell back into line with its struggles in conference play.

Mekhi Mitchell went 2 for 2 from the stripe as the only Razorback to hit all his free throws.

The Razorbacks had two opportunities for and-one three-point plays in the first 5:15 and could not convert either one.

Anthony Black scored Arkansas’ first points on a short bank shot and he was fouled by Amaree Abram at the 18:55 mark, but he missed the free throw.

Jordan Walsh converted a short turn-around jumper off the glass at 14:45 and was fouled by Jayveous McKinnis, but he too, took an errant foul shot after a timeout.

Moments later, Rebels forward Robert Allen was fouled by Mekhi Mitchell while converting in the lane and he completed his and-one for a 12-10 Ole Miss lead.

With Makhi Mitchell out of the starting lineup, freshman guard Anthony Black is the lone Razorback to start all 19 games. Mitchell started the first 18 and Ricky Council has started 18, as he was out of the first five only in an 84-69 loss to Alabama on Jan. 11. Jordan Walsh was in the starting five for the first time since Jan. 7 at Auburn in his 15th start.

Davonte Davis started his 14th game and his eighth in a row. Kamani Johnson made his second consecutive start and his third of the season.

Mitchell and freshman Darrian Ford were the first Arkansas substitutes at the 17:53, replacing Council an Johnson.

• Ricky Council scored a season-low 2 points on 1-of-6 shooting. He came out early in the second half and did not return, stuck on 18 minutes played.

• Freshman guard Nick Smith was back with the team and sitting behind the Hogs’ bench for the first time since a Dec. 21 win over UNC-Asheville.