Transfers will be crucial to Arkansas' baseball success 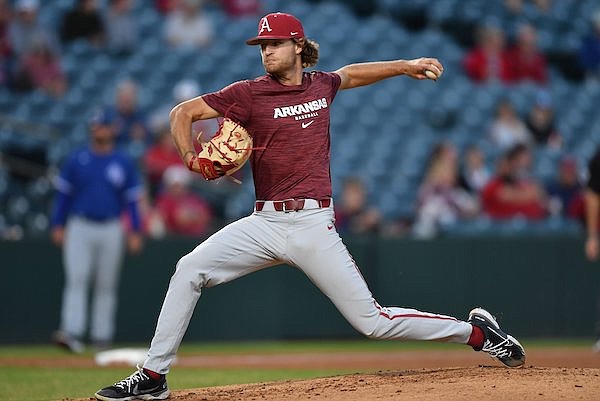 FAYETTEVILLE — More than half of Arkansas’ baseball team is new to the program in 2023, and more than half the newcomers are transfers.

The Razorbacks have 16 transfers on this year’s roster — six from other Division I programs and 10 who transferred by way of a junior college. D1Baseball.com ranks transfer classes each offseason and ranks Arkansas’ latest haul 10th nationally.

Transfers are likely to start at at least four positions in the field — shortstop, left field, catcher and center field — and might start at third base or designated hitter for the Razorbacks. Transfers are also expected to prominently factor into the team’s pitching plans.

Arkansas had to lean hard on the transfer market because of how many players were lost from last season’s team. Sixteen of the 27 Razorbacks who were on the roster for the College World Series are now gone.

“This year was a little different than maybe the past few years because we lost more players at once that were playing,” Arkansas coach Dave Van Horn said. “You’re always going to lose a guy or two that aren't playing, or whatever the situation may be, but to lose so many position players can be difficult.”

Van Horn still wants to build the core of his team through recruiting players out of high school. This is evident in the Razorbacks’ signing class of 2023 that includes 13 players who are among the top 100 prospects in the country, according to Perfect Game — four more top-100 players than any program has had since Perfect Game began ranking classes in 2011.

Those players will have a decision to make this summer when the MLB Draft rolls around.

“Just looking into the statistics over the years … 58% of those kids go to school,” Van Horn said of players rated in the top 100. “So we feel like that if it stays true that we should get half of them, maybe a little more."

For this year, though, Arkansas’ fortunes are tied largely to how well transfers play. It feels like just about every transfer on the roster is one to watch.

Hudson Polk of Oklahoma had an edge over Parker Rowland of Eastern Oklahoma State College (and Arkansas State before that) to be the Razorbacks’ starting catcher; the shortstop battle is between Harold Coll of San Jacinto (Texas) College and John Bolton of Austin Peay; and the outfield is expected to include two starters who played elsewhere last season — center fielder Tavian Josenberger of Kansas and left fielder Jared Wegner of Creighton.

At third base, transfer Caleb Cali is battling freshman Jayson Jones and sophomore Kendall Diggs to start. Cali was a JUCO All-American last season at the College of Central Florida and was one of the Razorbacks’ best hitters in the fall. One of the third basemen is likely to be a designated hitter when they are not in the field.

On the mound, the Razorbacks are expected to get several innings from right-handers Cody Adcock of Crowder (Mo.) College and Koty Frank of Nebraska, and left-hander Hunter Hollan from San Jacinto. It would not be a surprise to see Hollan or Adcock crack the starting rotation.

“I just think that we’re very fortunate that we — at least off the field, and I think it’s going to be on the field – kind of hit the jackpot with some of these transfers as far as their makeup,” Van Horn said. “You never know what you’re going to get.”

The high number of transfers gives Arkansas an older team. There are 10 players who are 22 or 23 years old, and Bolton and Wegner will turn 24 this summer.

That kind of maturity has helped the Razorbacks during this time of transition.

“Having some of those guys around a little bit, I think maybe it calms some guys down, so to speak," Van Horn said, "just knowing we’ve got some guys that have been through it on both sides of the ball."

Van Horn thinks the trend toward older teams will continue in the great baseball conferences like the SEC, ACC and Big 12.

“Experience and age, they’re physical and know how to win,” Van Horn said of the transfers’ endearing characteristics. “Maybe they don’t come from a winning program, but they just need to get into one and change their mindset a little bit. I just feel like because of all that’s expected that you’re going to see teams are older.”

Arkansas’ 2022 team benefitted from the experience provided by transfers. Catcher Michael Turner and outfielder Chris Lanzilli played huge roles in the Razorbacks’ run to the College World Series. Turner was named to the all-tournament team after a sizzling stretch that saw him also earn most valuable player at the NCAA regional in Stillwater, Okla.

Turner and Lanzilli played their best baseball a year ago, after stepping into a program with higher expectations and a better talent level. Van Horn said last season that transfers can sometimes be some of the hardest workers on a team because of how enthusiastic they are to step into a better situation.

First baseman Brady Slavens can relate. Slavens began his career at Wichita State in 2019 and came to Arkansas after playing at Johnson County (Kan.) Community College.

“It’s definitely motivating to want to be at your best all the time,” Slavens said. “Otherwise, you’re just going to lose your job.”

The proliferation of transfers has highlighted a new truth for coaches: In the age of immediate eligibility for transfers, a player lost in recruiting might become a player won later down the line.

Adcock and right fielder Jace Bohrofen are at Arkansas after initially turning down the Razorbacks. Adcock, from Texarkana, chose to play at Ole Miss as a freshman. Bohrofen, a legacy player, followed his father’s and brother’s footsteps to Oklahoma.

“I was very fortunate to have built and kept a good relationship with DVH and Coach (Nate) Thompson throughout my recruiting process,” Bohrofen said. “When I left OU and hopped in the portal, they were the first team to reach out to me, and the conversation wasn’t awkward at all. It’s almost like we just picked up from where we left off recruiting in high school. It was just smooth conversation and transition. I’m very thankful that they took me.”

“To get them back means we leave a good impression on them,” Van Horn said. “When somebody calls and tells me they’re going somewhere else, obviously I’m disappointed...but we’re always nice to them. I don’t want our coaches getting upset.

"You’ve got to learn how to accept that, and in this day and age it’s probably a real good practice acting like that because you might get them back in a year.”