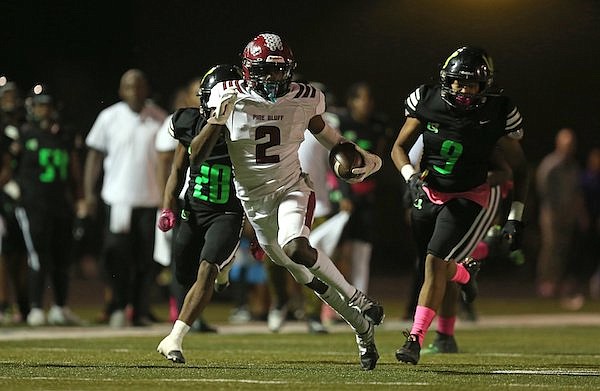 Pine Bluff's Courtney Crutchfield (2) carries the ball during a game against Mills on Friday, Oct. 7, 2022, in Little Rock.

With Pine Bluff receiver Courtney Crutchfield and Bentonville receiver CJ Brown receiving scholarship offers from Arkansas during Saturday’s Prospect Day, eight in-state prospects have offers from the Razorbacks in the class of 2024.

Since 2010, Arkansas has extended offers to an average of 7.2 in-state high school prospects per year while signing an average of 4.7 per year.

Despite the Razorbacks extending offers, sometimes offers are not honored for various reasons, including character, academics and performance on the field. Other prospects choose to go out of state.

The 2022 in-state class saw 13 prospects with offers from Arkansas, and 10 signed with the Razorbacks. The 2022 class with 10 signees was the largest in-state haul since the 2008 signing class, which featured 15 in-state recruits.

The 2024 class has a chance to rival the class of 2022’s 10 signees, depending on the development of several junior prospects on Arkansas’ radar.

Crutchfield receiving the offer from the Razorbacks on Saturday was something he had been seeking.

“Back in the ninth grade, they’re the offer I always wanted,” Crutchfield said. “I always looked up to the Razorbacks, because that’s where I’m from. It means a lot.”

While thrilled about receiving the Arkansas offer, Cruthfield said he is not in a hurry to make a decision because he anticipates landing more offers as a senior.

He hung out Saturday with other top junior in-state prospects such as Mills defensive lineman Charleston Collins and Benton running back Braylen Russell.

Getting to know the Arkansas coaching staff was one of the highlights of his visit.

“We went to the meeting room and all the coaches introduced themselves and all the goals they’ve accomplished,” Crutchfield said.

Crutchfield is also outstanding on the basketball court, where he earned first-team All-Tournament honors at the King Cotton Classic in December.

“It helps me to stay in shape and keeps my head on straight,” Crutchfield said of basketball. “Keeps me active so I won’t be sitting around not doing nothing.”

Crutchfield has yet to be rated by each of the four major recruiting services.