Black back in do-it-all mode for Razorbacks 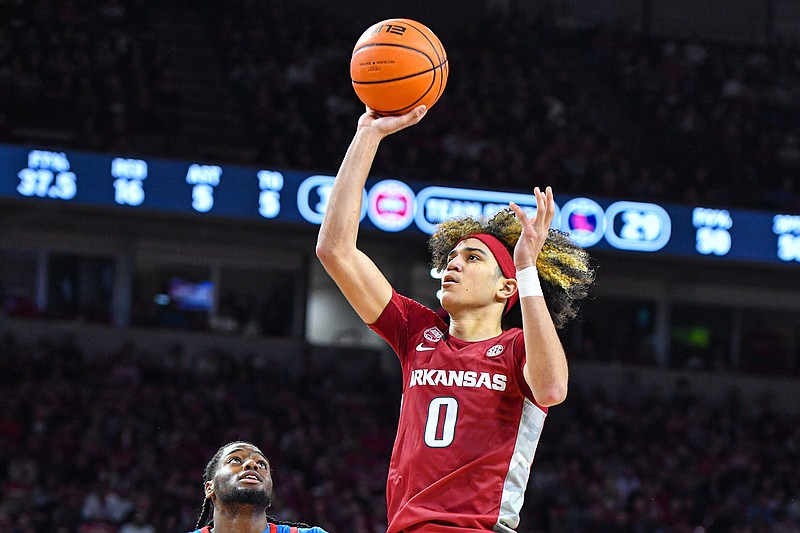 Arkansas guard Anthony Black (0) shoots as Ole Miss guard Amaree Abram (1) defends, Saturday, Jan. 21, 2023, during the second half of the Razorbacks’ 69-57 win over the Rebels at Bud Walton Arena in Fayetteville.

During the Razorbacks’ 79-76 loss at Missouri, he had four of his players foul out in the same game for the first time, he said. Starters Davonte Davis, Kamani Johnson and Makhi Mitchell, and reserve Jordan Walsh were each hit with five fouls as Arkansas was whistled for 33 as a team.

Three days later against Ole Miss came a first the Razorbacks’ fourth-year coach could enjoy. Freshman guard Anthony Black finished with 17 points, 8 assists and 5 steals in the team’s 69-57 victory over the Rebels.

According to Sports Reference, Black became the first player in Musselman’s college head coaching career to record such a stat line.

“You're seeing growth in his game on both sides of the ball,” Musselman said. “There are not many freshmen that are going to have 17, 8 and 5 steals. I mean, five steals to me is as impressive as anything he did.”

More from WholeHogSports: How to watch and listen to Arkansas-LSU on Tuesday

Black is only the fourth SEC guard in the last five seasons to match or exceed those numbers. And he is the first Razorback with at least 17 points, 8 assists and 5 steals since program-great Kareem Reid turned in 29 points, 9 assists and 5 steals against Louisville in December 1997, according to HogStats.com.

Black’s five steals against Ole Miss set a season high. They were the most by an Arkansas player since Davis tallied five during the 76-57 victory over Bradley in North Little Rock on Dec. 17.

Davis gave Black a shoutout Saturday for the various ways he impacts the Razorbacks on the defensive end.

“Knowing where to be on the back side when it’s time to help your teammate, things like that,” Davis said. “We want and need him to do it every single night.”

For the third consecutive game, Arkansas found a great deal of success from three-point range against Ole Miss. The Razorbacks knocked down 8 of 20 attempts, and Black had a hand in a majority of the perimeter scores.

Arkansas finished 6 of 8 beyond the arc immediately following a Black pass, including 4 of 5 after halftime.

“He’s our point guard, and he does a great job at just doing his job,” Walsh said. “And whenever it’s necessary to step out of the job and help the team a little bit more in a different area, he’s willing to step up and do that, too.

“(He will) not only do it, but do it at a very great rate, a successful rate.”

KenPom data shows that Black has assisted on 26.5% of the Razorbacks’ scores when on the floor in conference games. That figure places him ninth in the league.

Entering a key home game Tuesday against an LSU team that has not won since it defeated the Razorbacks on Dec. 28, Black is on his best scoring run in SEC play. He has scored in double figures in three consecutive games for the first time since Nov. 22-28 against Creighton, San Diego State and Troy.

“We need him on the court every second we can,” Walsh said. “He’s great at seeing the game, making reads, attacking the rim. He’s really locked in with Muss, too, so he always knows what Muss is thinking. He’s always just controlling the pace of the game.

“We need him out there every second we can.”