Davis a 2-way star in Hogs' win over LSU 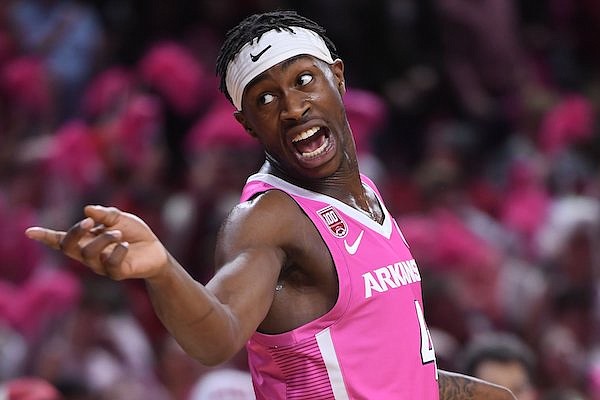 Arkansas guard Davonte Davis is shown during a game against LSU on Tuesday, Jan. 24, 2023, in Fayetteville.

FAYETTEVILLE — During his three seasons in an Arkansas uniform, Davonte "Devo" Davis has put together several impressive stretches of play.

Razorbacks coach Eric Musselman believes the junior is in the midst of one of his best right now.

The veteran guard put on a two-way clinic for Arkansas against LSU on Tuesday in the Razorbacks’ convincing 60-40 victory. The win pushed Arkansas to 14-6 overall and 3-5 in SEC play.

Davis turned in perhaps his most efficient game of the season, finishing with 16 points on 7 of 8 from the floor, including 2 of 2 from three-point range, to go with 3 assists. And on the defensive end he held Tigers guard Adam Miller largely in check as LSU floundered offensively.

“The biggest thing, and my wife said it two days ago, his shot selection has been unbelievable,” Musselman said. “Tonight, he’s telling us to slow it down, get a good shot and milk the shot clock. That’s maturity on his part, it’s him understanding the system, understanding what we’re looking for down the stretch.

Davis had a bounce in his step from the outset. He forced a missed jumper by Miller 1 minute, 20 seconds into the game, then added a mid-range shot of his own 22 seconds later to get Arkansas on the board.

The Jacksonville native was motivated by how the Razorbacks lost in Baton Rouge, La., on Dec. 28. Some of the late-game extracurricular activities in the first meeting — including Miller making unnecessary contact with guard Anthony Black’s face prior to an inbound pass in the final minutes — did not sit well with Davis and Black, either.

And a tweet from Miller late last month added fuel to the fire.

“I’ll do whatever it takes to back up my teammates, and that’s what I did,” Davis said. “I think (Miller) averaged nine (points per game) in conference. That’s what he had. We tried to hold him to his average or under.

“But (the matchup was not) too personal, to answer your question. I mean, I’ve done guarded better people.”

He did not score until his 14th touch of the game.

“(Miller) was feeling himself a little after last game even though he didn’t really do nothing,” Black said. “It was quiet today, though. It was real quiet – the whole game.”

Davis’ offensive performance was anything but quiet. According to KenPom data, he posted a season-best offensive rating of 149 in the win.

The junior has made multiple threes in three straight games for just the second time in his career.

“He’s playing how we expect him to play and a little better,” Black said of Davis. “Knocking down shots, commanding the offense most of the time, being a leader. Just being Devo, playing with a lot of energy. And of course on defense, just taking their best player out of the game every time and making them look like they don’t usually look.

“He’s playing great for us. The last two games we’ve won, Devo’s been huge in both of those games, so good job, Devo.”

Davis scored 12 of his team-high 16 points in the first half, setting the tone as Arkansas raced out to a 38-13 lead with 3:36 remaining until halftime. He became a floor general after the break, especially down the stretch, and led the Razorbacks with three assists.

The assists generated 7 points, including a pair of dunks from forward Makhi Mitchell, who recorded 10 points, 8 rebounds and 3 blocks.

“It’s really cool to see growth in his game, both as a leader and offensively and defensively he keeps getting better,” Musselman said. “I don’t know how that’s possible, but he keeps doing it.