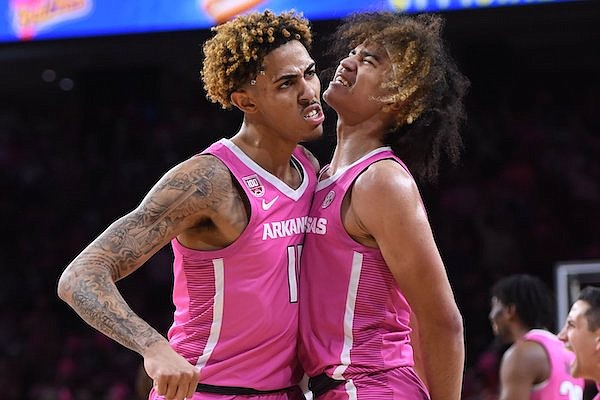 Arkansas forward Jalen Graham (left) and guard Anthony Black celebrate during a game against LSU on Tuesday, Jan. 24, 2023, in Fayetteville.

FAYETTEVILLE — University of Arkansas Coach Eric Musselman didn’t have to give his basketball team a fiery pregame speech to give the Razorbacks extra motivation for a rematch with LSU.

The Razorbacks were more than ready and pounded the Tigers 60-40 in Walton Arena on a snowy Tuesday night to avenge their 60-57 loss at LSU on Dec. 28 in the SEC opener.

“We were extremely excited to play this game based on how the game went down in Baton Rogue,” Musselman said. “I thought we had a group that was really motivated the last 48 hours.

“And as we got closer and closer to tipoff, there was no external motivation needed. That locker room, I feel like, was extremely motivated to play this game.”

The Razorbacks (14-6, 3-5 SEC) led for the final 38 minutes and 9 seconds and were ahead by as many as 25 points in a first half dominated by their suffocating defense.

Arkansas outscored LSU 23-3 the last 10:38 of the half, including 8 points by freshman guard Anthony Black, to take a 38-14 halftime lead.

“On defense, we were just locking up,” said Black, who had 14 points, 7 rebounds, 3 assists and 3 steals. “They just couldn’t do nothing. They couldn’t get anything.

“Like, I don’t think they even knew what to do because they just couldn’t get nothing.

“Then on offense we were getting so many stops that the lead kept growing and we were just kind of out there playing free, playing more loose because the lead’s growing you kind of get a little more confidence, and we just started knocking down shots.”

It was the third-fewest points scored by an SEC opponent in the first half against the Razorbacks, according to HogStats.com, behind 9 by Mississippi State in the Bulldogs’ 61-41 loss in 2015 and 11 by Vanderbilt in the Commodores’ 56-33 loss in 2013.

The Razorbacks started 15 of 21 from the field before missing their last five shots of the first half.

“Great first half defensively,” Musselman said. “I mean, you don’t see a college basketball game where you hold somebody to 3 for 25.”

“In the first half, we just couldn’t finish at the rim and the turnovers killed us,” LSU Coach Matt McMahon said on the Tigers’ postgame radio show. “We have a pretty simple formula that would give us a chance. You saw that some in the second half.

“We were able to execute and finish some plays, not have the crazy turnovers that led to transition [points for Arkansas]. When you turn it over 10 times and miss 22 of you 25 shots against an elite transition offensive team, you are in big trouble.”

“Just getting stops,” said Arkansas junior guard Davonte Davis, who had 16 points, 7 rebounds, 3 assists and 2 steals. “That was the emphasis, just try to get stops and run so that if they do get back in their zone, they aren’t able to set up in it.”

“I was really, really impressed with a lot of little things we did defensively,” Musselman said on Arkansas’ postgame radio show. “We did a great job on their two star players that we identified in [KJ] Williams and [Adam] Miller, holding those two to five field goals combined and 22 shots.”

Williams, a senior forward, and Adams, a sophomore guard, each scored nine points to lead the Tigers.

Arkansas senior forward Makhi Mitchell, who had 10 points, 8 rebounds and 3 blocked shots, was the primary defender on Williams, who shot 2 of 10.

“Makhi did a great job of walling [Williams] up, going vertical,” Musselman said. “We need Makhi to play really well and he did that tonight for us.”

“I’ll do whatever it takes to back up my teammates and that’s what I did,” Davis said. “I think [Adams] averaged nine points in conference, that’s what he had, so we tried to hold him to his average or under.

In the first Arkansas-LSU game, Adams slapped Black in the face — but didn’t draw a foul — when the Tigers were inbounding the ball.

“You saw what happened last game, so that kind of gave us a little chip on our shoulder,” Black said. “They were feeling themselves a little bit.

“[Adams] was feeling himself a little after the last game, even though he didn’t really do nothing.

“Just all the talking. But it was quiet tonight, though. It was real quiet, the whole game.”

Arkansas junior guard Ricky Council had a nice bounce-back game with 10 points, 7 rebounds and 7 assists after being held to a season-low 2 points in the Razorbacks’ 69-57 victory over Ole Miss on Saturday.

“Ricky played really well, even though some of the shots he took didn’t fall,” Davis said. “He had a few extra assists. … That helped his game and the entire team as well.”

“I think with Ricky we feel like he’s such a great athlete that he needs to help us defensive rebounding,” Musselman said. “That was a big point of emphasis from the last game, and he went out and had six defensive rebounds.”

LSU regrouped at halftime and pulled within 46-35, prompting Davis to call a timeout with 9:03 left.

“Basketball’s a game of runs,” Black said. “So we just kind of came in and regrouped.”

Coming out of the timeout, Mitchell got a dunk with an assist from Davis. The Razorbacks pushed their lead to 57-36 on another Mitchell dunk with 4:42 left on Council’s assist.

“We just managed the ball well, managed the clock,” Black said. “Took care of the ball and then we started getting lobs and cuts and all kinds of stuff.

“We just weathered their run and we kind of went on our own run like we did in the first half.”