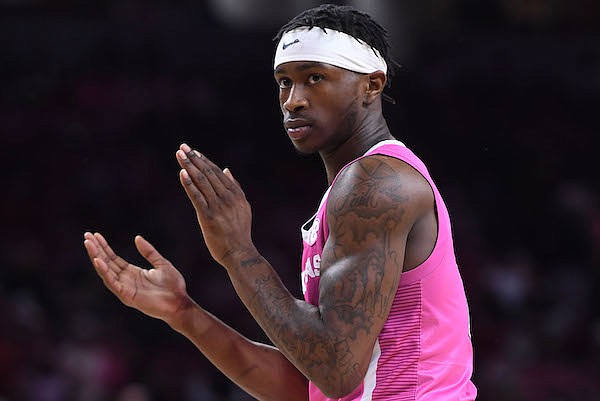 Arkansas guard Davonte Davis is shown during a game against LSU on Tuesday, Jan. 24, 2023, in Fayetteville.

The junior guard from Jacksonville made his first five field goals and finished 7 of 8 en route to a game-high 16 points to go along with 7 rebounds, 3 assists and 2 steals.

Davis has scored 15-plus points in five consecutive games for the first time in his career while also guarding the opponents’ top perimeter player.

“He’s playing how we expect him to play and a little better,” said guard Anthony Black, who added 14 points. “Knocking down shots, commanding the offense most of the time, being a leader. Just being Devo, playing with a lot of energy.”

“Putting that work in, baby,” Davis said to describe his hot run. “And I’m glad it’s paying off. I mean, shoot, I’ll be in the gym every day, like all day.

“The last two games we’ve won, Devo has been huge in both of those games,” Black said.

Jalen Graham had a pair of one-hand slams one minute apart during the Hogs’ 23-2 tear midway through the opening half, and the second one was a thing of beauty set up by Ricky Council.

On the first, Graham took a pass from Anthony Black near the left baseline, saw nobody sealing the lane and drove in unimpeded for the jam and a 26-11 lead at the 8:00 mark.

A minute later, Council rebounded a miss by Trae Hannibal, pushed the ball up the floor and delivered a behind-the-back pass in close quarters to Graham, who rose up for the right-hand flush at exactly 7:00 to make it 30-11.

That play forced LSU Coach Matt McMahon to call his fourth timeout of the half.

In the second half, the Razorbacks got three dunks from Mekhi Mitchell and one from Graham, some of them on lobs, as they reasserted their dominance.

LSU dropped its seventh consecutive game since opening conference play with a 60-57 win over the Razorbacks in Baton Rouge, La.

It is the program’s longest losing streak since the 2016-17 team under Coach Johnny Jones lost 15 consecutive games en route to a 2-16 SEC record.

The Tigers’ seven straight losses by double figures are their most since the 1959-60 team did the same.

Struggling to 2-of-12 shooting early in the second half after LSU cut its 25-point deficit to 46-35, Arkansas guard Davonte “Devo” Davis called a timeout that wound up being a momentum changer.

Coming out of the timeout, Davis had the ball beyond the left elbow when he spotted Mekhi Mitchell cutting to the hole down the right side. Mitchell took a hot pass from Davis for a dunk and a 48-35 lead at the 9:03 mark.

“They were trying to get on an even longer run,” Davis said. “I was like ‘Nope, not doing it. Let’s call this timeout, get ourselves together.’ And then we come back out, try to get a bucket.”

After a shot clock violation by the Tigers and a media timeout, Davis hit a jumper behind a Kamani Johnson screen and the Razorbacks were off and running again.

“We got a stop on the other end and then the media [timeout], so I think we did a pretty good job,” Davis said. “I think I executed on that pretty well.”

Davis said Coach Eric Musselman, who almost always calls the Arkansas timeouts, made a confused face but was good with the timeout call.

LSU guard Justice Williams appeared to dodge an intentional foul call after grabbing a jersey from behind midway through the second half. Arkansas guard Ricky Council undercut a lazy pass from Kendal Coleman near the top of the key and was headed down court when Williams reached out and snagged him, causing the ball to carom away. The officials blew their whistles and reviewed the play twice before calling it a common foul.

Council missed the front end of a one-and-one at the 10:34 mark, the Hogs’ first miss of the night, and Mekhi Mitchell rebounded, though Arkansas could not score a second-chance basket.

LSU scored a pair of third-chance baskets, one in each half.

Guard Trae Hannibal snapped a 15-0 Arkansas run by working hard in the paint. The 6-2 senior missed a shot down low, rebounded and missed, then got another rebound and stuck it back to pull the Tigers within 30-13.

In the second half, KJ Williams missed a pair of shots, got the rebounds both times and scored.

However, that was only the sixth-fewest points scored by an Arkansas opponent in the first half during the shot clock era. According to Hogstats.com, the Razorbacks held Mississippi State to nine first-half point in a 61-41 Arkansas win at Walton Arena on Feb. 7, 2015.

The Razorbacks surpassed 8,000,000 in attendance at Walton Arena, even with a crowd tamped down by the heavy snow in Northwest Arkansas.

Arkansas stood at 7,803,965 tickets sold at the 30-year-old facility entering the season, and the first nine games, all listed as sellouts, brought the all-time attendance to 7,995,965.

UA officials encouraged fans sitting in the upper deck to come on down to the lower bowl to help fill in the areas closest to the court.

Arkansas Coach Eric Musselman remains unbeaten in Arkansas-LSU games in Walton Arena regardless of whether he’s on the home or visiting bench.

Musselman improved to 5-0 in Arkansas-LSU  matchups in Walton Arena with the Razorbacks’ victory on Tuesday night.

• ESPN analyst Jimmy Dykes, the former Razorback player and women’s coach, indicated star freshman guard Nick Smith was about two weeks away from a return during the telecast.

• As part of the school’s Coaches vs. Cancer initiative, the Razorbacks held a “pink out” and wore pink jerseys, with the coaching staff and many fans also clad in pink. Danyelle Musselman, wife of Coach Eric Musselman, received a plaque from the American Cancer Society for being a volunteer who has helped raise $1 million.

• Arkansas went without an offensive rebound during the first 19 minutes before Kamani Johnson snagged a Jalen Graham miss in the final minute of the half.

• Arkansas native Justice Hill stepped away from the team last week for what Coach Matt McMahon called “personal reasons” and not to do with any disciplinary measure, with no timeline set on his return.