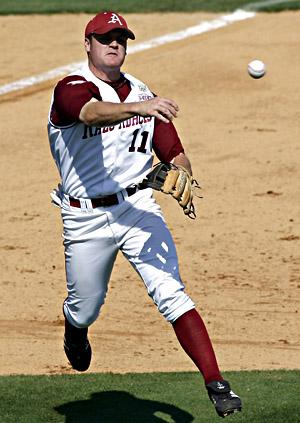 Arkansas third baseman Logan Forsythe throws to first for an out against Alabama at Baum Stadium in Fayetteville on May 3, 2008.

The SEC announced the team Tuesday. Forsythe, a junior, finished the regular season with a .352 average. In conference play, he hit .371 with seven home runs. Forsythe tied for first-team honors with Vanderbilt third baseman Pedro Alvarez.

Arkansas did not qualify for the SEC tournament and is waiting to see if it is invited to the NCAA tournament. The NCAA field is announced Monday.