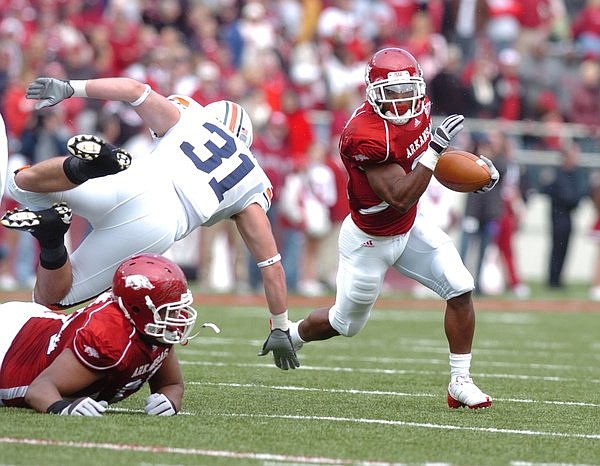 Arkansas tailback Michael Smith runs to the outside against Auburn in the first half Saturday in Razorback Stadium. Smith had 18 carries for 145 yards and one touchdown in the Hogs' 44-23 victory.

FAYETTEVILLE — It was the right margin, but the wrong team. That is, unless you are Arkansas, implied quarterback Ryan Mallett who smiled when asked about Camden native and former Auburn coach Tommy Tuberville predicting Auburn would beat Arkansas by three touchdowns.

Before a mostly giddy 72,559 on a seasonably chilly football Saturday afternoon at Reynolds Razorback Stadium, the Razorbacks, 3-2 and now 1-2 in the SEC West, defeated the heretofore undefeated 17th-ranked Auburn Tigers, 44-23.

“It was the other way, right?” Mallett said beaming. “We won by three [touchdowns], right? OK. Sorry, Coach Tub.”

Actually it was another Arkansas born coach with Auburn ties who was the bull’s eye for Arkansas objectives Saturday.

Fort Smith native Gus Malzahn, the former Arkansas state high school championship coach at Springdale and Shiloh Christian and the Hogs’ offensive coordinator in 2006 before coordinating Tulsa Missouri Valley Conference championship offenses in 2007 and 2008, coordinates an offense for first-year Auburn head coach Gene Chizik that had scored in every quarter and averaged 512 yards a game, always over 400 yards.

Saturday the Tigers got skunked in the first quarter by Arkansas defensive coordinator Willy Robinson’s crew. Auburn closed the half down 27-3 and was out-gained in offensive yards 495-375.

“We faced him last year with Tulsa and found a way to stop him (30-23) then,” Arkansas sophomore defensive end Jake Bequette said. “He’s got more weapons at Auburn, but no matter what offensive scheme a team runs, if you come out and hit them hard in the mouth, they can be stopped.”

The Hogs popped the Tigers good in the first half, but with misdirections, trick plays and a more run than pass attack, Auburn and Malzahn got it going for a 20-point third quarter.

The Tigers would have had more in that third quarter but for Bequette recovering Auburn tailback Ben Tate’s fumble at the Arkansas 5 at 12:02. Mallett, scoring a 4-yard TD himself, quarterbacked a 95-yard drive for a 34-3 lead before the Tigers became a threat.

“That was a great call by Coach Robinson,” Bequette said of calling him to slant on what the Arkansas coach anticipated would be Tate on the boundary sweep. “[Malzahn] is a great offensive coordinator, but just like any offense, they have certain tendencies and we saw them on film and really exploited them.”

However Malzahn and Tate — who had 22 carries for a game-leading 184 yards and two touchdowns — did the exploiting in the third quarter.

“We knew they would have to turn to their tricks and use some misdirection which they did and were pretty successful with,” Bequette said. “But we didn’t panic. We kept our composure and finished strong.”

It wasn’t defense but Dennis Johnson’s kickoff return, however, that blunted the Auburn comeback after the Tigers closed from down 34-3 to down 34-23 with 9 seconds left in the third quarter. Johnson’s 70-yard kick return to the Auburn 30 preceded a 7-play, 30-yard scoring touchdown drive consuming 3:47 as Arkansas compiled a 10-0 fourth quarter.

“We had some momentum,” Chizik lamented of Johnson’s return, “ and they brought that thing back a pretty good ways.”

“Anytime it looked like it was gonna be close,” Petrino said. “Dennis (also a 59-yard return) changed the field position. I was very proud of the way he played. He didn’t practice a lot during the week. He got that quad injury last week in the game. He was full speed today and feeling great. I told him, you’re our kick returner. Get in there and go,”

Johnson, who injured a quadriceps and was replaced by Joe Adams as kick returner during last week’s 47-19 victory over Texas A&M, had to return kicks Saturday since Petrino revealed Adams suffered a stroke this week.

Adams, also one of Arkansas’ top receivers, is out of the hospital and attended Saturday’s game but his immediate football future is on hold pending further tests.

The Hogs not only were without Adams, but wideout Jarius Wright, three catches for 31 yards Saturday, suffered a concussion in the first half and didn’t return.

Tight end D.J. Williams, six catches for 57 yards and a touchdown , and wideouts Greg Childs, 5 for 85 and a touchdown, Cobi Hamilton, 3 for 42, and Lucas Miller, 3 for 32, including withstanding a bone-jarring hit on a 13-yarder, picked up the receiving slack as Mallett completed 24 of 327 for 274 yards against one pick.

Though injuring a hamstring in the second half, senior tailback Michael Smith, 35 carries for 176 yards when Arkansas beat Auburn last year in Auburn, Ala., gashed the Tigers again with 18 carries for 145 yards and a TD.

For a complementing combination of offense, defense and kicking game, it was, Arkansas coaches and coaches concurred, a season’s best.

Saturday in Gainesville, Fla., the Hogs play against the best, —the No. 1 ranked reigning national/SEC champion Florida Gators.