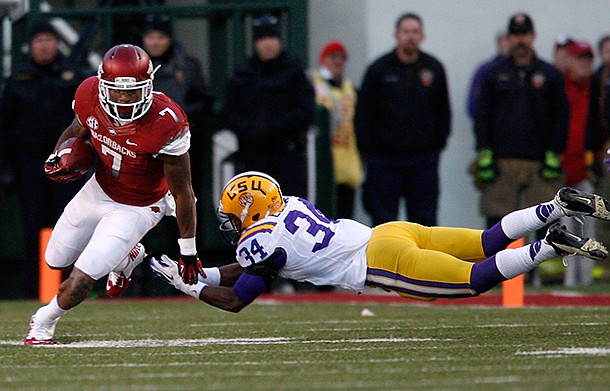 FAYETTEVILLE — Arkansas running back Knile Davis will enter the 2013 NFL Draft, according to a release Wednesday.

Davis has signed with agent Mike Conley Sr., a former Olympic jumper and Razorbacks all-American, of MMG Sports Management. According to CollegeFootballNews.com, Davis will work out with former Olympic sprinter Michael Johnson in Dallas.

"Over the last few weeks, I’ve been very reflective in weighing my options," Davis said in a release. "However after careful counsel with my family and support system, I’ve made the decision to forego my final year of eligibility and enter the 2013 NFl Draft. I sincerely look forward to working towards realizing my ultimate goal of becoming an NFL running back of the highest caliber."

Davis rushed for 377 yards and two touchdowns this season, his first back from a broken ankle that forced him to miss 2011.

"In my four years at the University of Arkansas I’ve had many more ups than downs. As a 17-year-old coming to campus, I truly didn’t know what to expect. But, with the help of the administration, staff, and my teammates, the experience has exceeded my expectation, in developing me both as a player and a man.

"What I will remember most over the past four years has been the patience, support, and overall concern the Razorback Nation has shown me and my family after each setback. I will forever be a Razorback and will strive to make them proud on the next level."