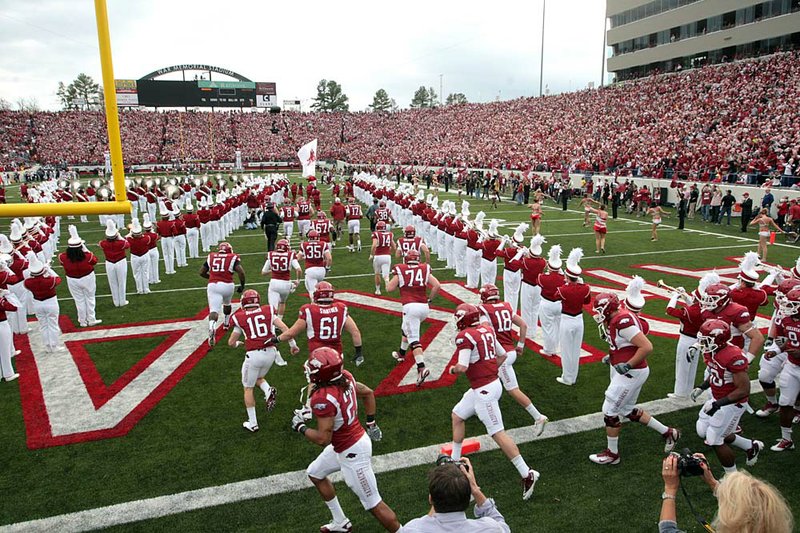 11/19/11 Arkansas Democrat-Gazette/STEPHEN B. THORNTON Arkansass Razorbacks runs out onto the field at the start of their game Saturday against Mississippi State at War Memorial Stadium.

FAYETTEVILLE — Charles Staggs is asked "every day" about the future of Arkansas football games in Little Rock's War Memorial Stadium.

The stadium's manager said Tuesday he and the War Memorial Stadium commission are exploring the possibility of expansion in an attempt to ensure the Razorbacks keep playing two games there every season.

"We are looking at something to see if we can entice them to stay here," Staggs said.

Staggs said the commission talked about adding high-priced club seating at the 63-year-old stadium in November, and he expects architects to present drawings at its next meeting later this month. He said they will likely feature an expanded press box that could take up the entire west side of the stadium.

Staggs said he is concerned Arkansas might play fewer games in Little Rock after the school's contract with the stadium runs out after the 2016 season.

"Yes, I really am," Staggs said. "I don't know how the commission feels, but I'm concerned about it."

He said the expansion talk could be viewed as the commission's pre-emptive way to try and keep two games — which he called the "lifeblood of the stadium."

"We couldn't survive without those two games that we have here," Staggs said.

Arkansas announced plans for a future expansion of the on-campus, 72,000-seat Razorback Stadium in Fayetteville in October. Those plans were part of an overall estimated $300 million athletic growth master plan, and athletic director Jeff Long said the timetable was dependent on demand and money.

The Razorback Stadium expansion would be the first since a 19,000-seat expansion in 2001 that enclosed the south end zone and added a second deck to the east side.

Long said the estimated $78 million to $95 million expansion would enclose the north end zone and feature at least 5,000 new seats, including field-level suites and indoor and outdoor club areas.

Long wasn't nearly as definitive at October's announcement when asked about the impact of a possible Razorback Stadium expansion on future games in Little Rock. War Memorial Stadium has a capacity of 53,955.

"That decision will be made sometime in the future," Long said.

Arkansas pays the War Memorial commission $75,000 per game, and the stadium also collects concessions and parking fees from the neighboring War Memorial Golf Course. Staggs said the loss of any Razorbacks games would be a "big hole in the budget."

The stadium's 2000 contract with the stadium originally ran through the 2014 season and called for three football games to be played in War Memorial in four of the 15 seasons. However, the contract was amended in 2008 — extending the duration through 2016 while keeping the number of annual games at two.

Whether a possible future expansion of Razorback Stadium could impact the games in Little Rock has been widely discussed throughout Arkansas, a discussion Staggs is well aware of and concerned about.