Visit put Hogs in the hunt for Thomas 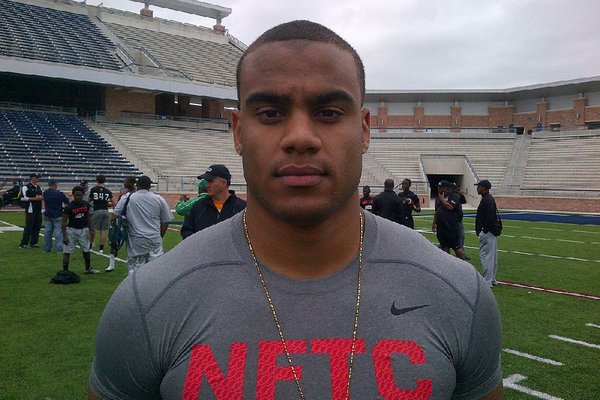 DALLAS — Arkansas wasn't on highly recruited defensive end Solomon Thomas' radar until he visited the Razorbacks during the Easter weekend. He and his parents were in Fayetteville see his sister who attends Arkansas.

"I just went up there to visit my sister and I was like I might as well check out the school," said Thomas, who previously visited six times to see his sister before his recent trip. "I really didn't have much interest in Arkansas."

After the visit, he went from no interest to a good amount of interest in the Hogs because of the coaching staff, facilities and the campus life.

He showed why he's considered one of the best in the nation at his position by earning the defensive line MVP award at the Dallas Nike Camp on Sunday. He explained other factors for liking the Razorbacks.

"My sister is there, she's number one person in my world and I love her to death," Thomas said. "Definitely the campus. The campus is so beautiful out there and I've been there a lot to get a feel for the campus. Just the SEC and how the practice was so physical. Every play had a big hit. It was just a great atmosphere."

Thomas is rated the No. 88 prospect in the nation by national recruiting analyst Tom Lemming of CBS Sports Network. He praised the Arkansas coaches for being "real" with him and focusing on getting to know him.

"They barely told us how good Arkansas was," said Thomas, who reports he may visit his sister and attend Arkansas' spring game. "They just kept asking personable questions to see if I would fit in there and things like that."

He also excels in the classroom with a 3.4 grade point. He said he's considering business, journalism and communication as majors.

"Maybe a sports broadcaster, a writer," Thomas said. "I've always thought of being a sports agent or manager ."

He's hoping to have his final list of schools by the end of the summer.

"I'll probably have a top five before the season starts to make sure I know where I'll take my officials." Thomas said.

While he and his sister are very close, Thomas said the two will be fine if he goes elsewhere.

"If I go to school away from her we'll still be fine," Thomas said. "It was just nice to see what her school was like and I'm now considering them."