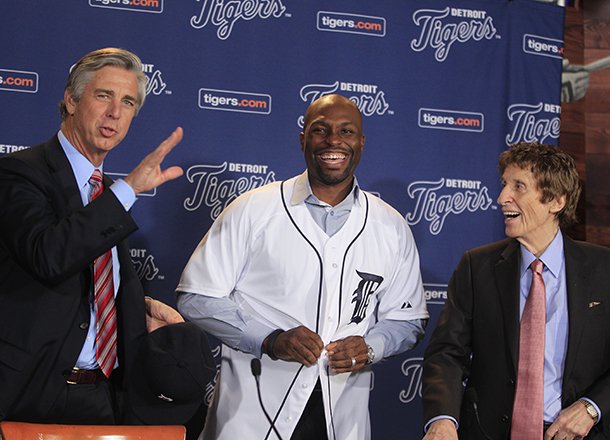 FAYETTEVILLE — Pine Bluff native Torii Hunter has donated $100,000 to the University of Arkansas to be used toward the construction of an indoor practice facility for the Razorbacks' baseball and track & field programs, Razorback Foundation associate director Norm DeBriyn said Monday.

Hunter, an outfielder, signed a two-year, $26 million contract with the Detroit Tigers last November. He has been a supporter of Razorbacks athletics throughout his professional career, though he never played college baseball after signing with Arkansas in high school.

The Minnesota Twins drafted Hunter in the first round of the 1993 MLB Draft. He played 16 MLB seasons with the Twins and Anaheim Angels.

Arkansas hopes to begin the construction of the new dual-sport facility later this year, associate athletics director Matt Trantham said last month. Trantham said the facility, which has an estimated price tag of $9.625 million, could be completed prior to the 2014 baseball season, but the speed of construction will be based on fundraising. An architect and contractor for the project have already been selected. 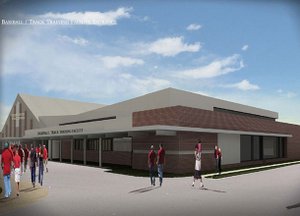 Photo by University of Arkansas
An artist's rendering shows a proposed dual-sport facility for baseball and track & field.

The proposed 45,000-square-foot facility will be built between Baum Stadium and the Randal Tyson Track Center. It will provide space for the baseball team to train in inclement weather and will also be used for indoor throwing events for track & field, and a weight room for both sports.

The building project is part of the university's master plan for athletes, which was unveiled in October 2011 at an estimated price tag of $320 million over 30 years.

Arkansas has already constructed new outdoor practice football fields as part of the plan. The $40.35 million project will include a new operations center for football that is expected to be opened later this year.

The UA Board of Trustees approved $36.5 million in bonds last week for the construction of three separate athletics facilities, including the baseball/track center. A basketball practice facility and student-athlete dining center have also been approved.

An estimated combined price tag for the three facilities is between $45.75 million and $57.625 million. The constructions will be paid for with bonds to be paid back by private donation to The Razorback Foundation, Inc.