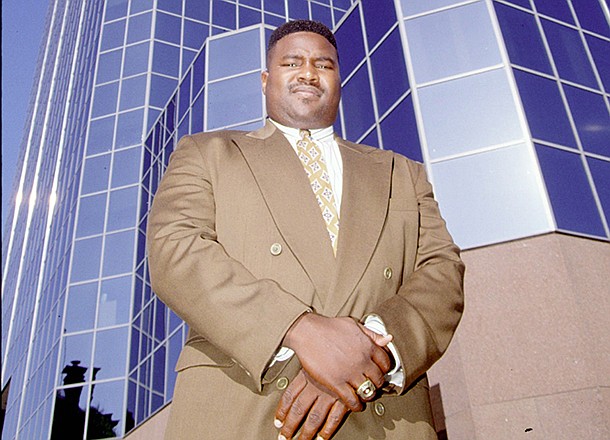 Elbert Crawford, pictured in 1993, was a member of two Arkansas Southwest Conference championship teams in the 1980s. He died Thursday at the age of 46.

Crawford, who lived in Little Rock, had been working in the real estate business in recent years.

Word of Crawford's death spread quickly among his Arkansas teammates.

"Everybody is in disbelief right now," said James Rouse, who played tailback for the Razorbacks. "You don't expect this to happen to one of us at our age."

Crawford, who played all positions on the offensive line during his Arkansas career, was the All-SWC center in 1989 and one of the Razorbacks' four co-captains.

"Elbert was a tremendous athlete, and so quick and skilled for a center," said Tim Horton, Auburn's running backs coach who was a receiver for the Razorbacks during Crawford's playing days. "He had an incredible amount of toughness, too.

"He wasn't afraid to stick his nose in there and mix it up with somebody."

Crawford was an eighth-round NFL Draft pick by the Los Angeles Rams in 1990, but was cut. He then signed with the New England Patriots, where he played two seasons and became a starter in 1991.

The Denver Broncos signed Crawford as a free agent after the 1991 season, but he suffered a heart attack in April of 1992 while working out the at the team headquarters.

While Crawford recovered from the heart attack, it ended his playing career. He became a player agent, working first with Stephens Sports Management.

Crawford later formed his own agency, but encountered financial difficulties and went bankrupt in 2000.

"I don't know about all that, I just know Elbert was a great teammate," said former Arkansas quarterback Greg Thomas. "I loved the guy."

Crawford played defensive end at Hall High School before moving to the offensive line when he went to Arkansas.

"We butted heads in high school," said Rouse, who played at Little Rock Parkview. "He was a really good defensive player.

"I liked it a lot better when Elbert was blocking for me at Arkansas than when he was tackling me."

Ken Hatfield, Arkansas' coach from 1984-1989, said the coaches knew Crawford was too talented not to be on the field, which resulted in his move from defense to offense.

"Elbert became as good a center as any team could want," Hatfield said. "It's very sad and shocking that we've lost him at such a young age.

"Boy, you just never now. That's why you've got to appreciate every minute you've got."