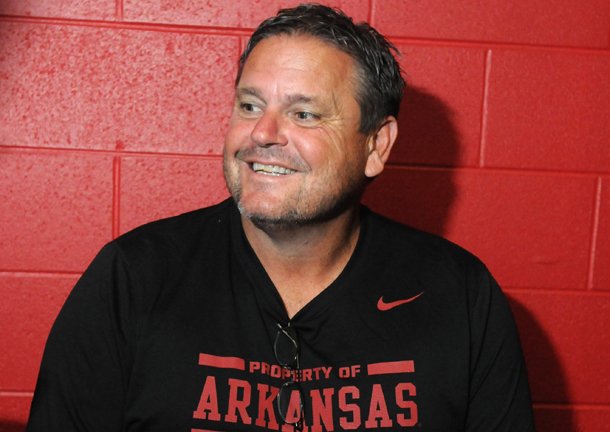 Arkansas associate head coach Sam Pittman talks to reporters during media day Sunday at the University of Arkansas in Fayetteville.

Wisconsin commitment and offensive lineman Jaden Gault, 6-7, 304 pounds of Monona Grove, Wisconsin said he was hosted by freshmen offensive lineman Dan Skipper and Reeve Koehler during his official visit to Arkansas over the weekend. He also spent time with senior center Travis Swanson.

All three told Gault that offensive line coach Sam Pittman doesn't change once you're on campus and they love playing for him.

Gault said he spoke to Pittman for 30 minutes over the phone early in the recruiting process and it felt like it was only five minutes. Thinks very highly of him.

He said his parents were impressed with Arkansas but still want him to attend Wisconsin. He did say they would be ok if he picked the Razorbacks. He said the Hogs have a chance to land him because he wants to play for Pittman.

Athlete Raymond Wingo of St. Louis University High School had 13 carries for 176 yards and 3 TDs. He had 2 receptions for 60 yards and a TD. He also had a 28 yard interception for a score.

Arkansas 2015 offensive line commitment Colton Jackson of Conway graded out at 82% and had 5 pancake blocks while not allowing a sack.

Arkansas offensive line commitment Jovan Pruitt of Dallas Bishop Dunne graded out at 87% and was named the school's offensive player of the week.

Offensive lineman Kaderious Rowe of Hope graded out at 92% and had two pancakes.

Bentonville sophomore quarterback Kasey Ford has completed 72 of 124 passes for 1,246 yards and 13 touchdowns.

Defensive end Kevin Bronson, 6-3, 245, 4.77 seconds in the 40 yard dash, of Delray Beach, (Fla.) Village Academy said he's been talking to defensive line coach Charlie Partridge about setting up an official visit for Dec. 13 but it's not a firm date as of Sunday.