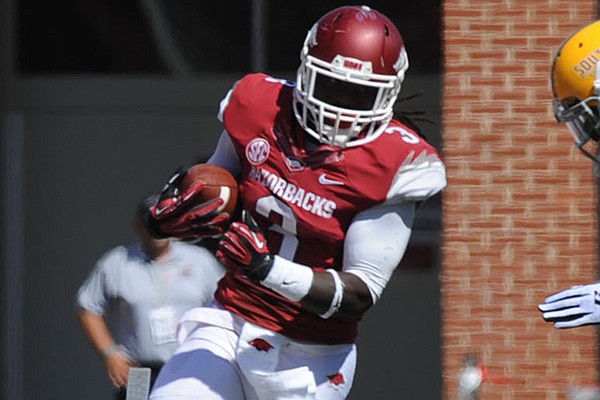 Arkansas running back Alex Collins (3) carries the ball Saturday, Sept. 14, 2013, during the first quarter of play at Razorback Stadium in Fayetteville.

FAYETTEVILLE — Next Saturday's game between Arkansas and Rutgers will feature three of college football's top rushers through the first three weeks of the season.

Arkansas' Alex Collins (418) and Jonathan Williams (393) rank fourth and seventh nationally in rushing yards. The duo ranks first and second in the SEC in rushing yards and has combined for five touchdowns.

The Razorbacks rank 11th nationally in rushing yards with 294.3 per game. Despite James' success, Rutgers ranks 40th with 217.7 yards per game.

The offenses are a stark contrast from a year ago, when the two teams combined for 74 attempts, 816 yards and eight touchdowns through the air during a game in Fayetteville. Rutgers won that contest 35-26.

The Scarlet Knights rank 88th nationally in passing offense through the first three games, while Arkansas ranks 112th. Both teams played the majority of their wins Saturday without their starting quarterbacks, combining to pass just 24 times.

Razorbacks starter Brandon Allen is expected to play in next Saturday's 2:30 p.m. Central game. Allen was taken out in the first quarter of the Hogs' 24-3 win over Southern Miss with a bruised shoulder.

Rutgers starter Gary Nova, who passed for a career-high five touchdowns at Arkansas last season, suffered a concussion in the first quarter of the Scarlet Knights' 28-10 win over Eastern Michigan. His status for next weekend's game is unknown.