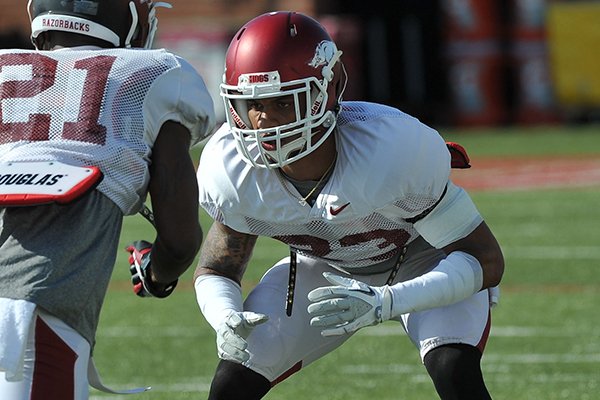 Defensive coordinator Robb Smith said Tevin Mitchel has practiced during contact drills after returning from off-season shoulder surgery. On Mitchel being held out of last Saturday's scrimmage, Smith said coaches have to be smart about how much contact he gets this preseason.

-Smith said the Razorbacks' defense made some improvement in Saturday's scrimmage, but called the playcalling "vanilla." Smith said the team is in the early stages of its game preparation for Auburn.

-Smith said he liked the aggressive attitude he saw from freshman safety Josh Liddell in the scrimmage. Liddell dropped would-be interceptions twice during the same drive, including one that would have been returned for a touchdown. Smith said he preaches the phrase "CTOTTY" to his secondary, which stands for, "Catch the ones they throw you."

-Linebacker Brooks Ellis went through some drills Tuesday, but is still limited by an injury to his kneecap. Ellis didn't practice in last weekend's scrimmage.

-Alan Turner said he will play the field safety this year, usually on the side of cornerback Tevin Mitchel.

-On being elected team captain, Turner said it was an honor for his peers to vote him to the position. Turner said he feels the distinction means people are listening to what he says in practice.

-Despite the first-team defense looking good in the latest scrimmage, Turner said there were several little things like miscommunication or defending a block the wrong way that the team saw later on film.

-Reserve nose tackle Bijhon Jackson needs to work on his conditioning, Segrest said. Jackson has worked some with the first-team.

-Segrest, who also works with the special teams, said Korliss Marshall and Keon Hatcher will likely be the team's kickoff returners for the Auburn game.