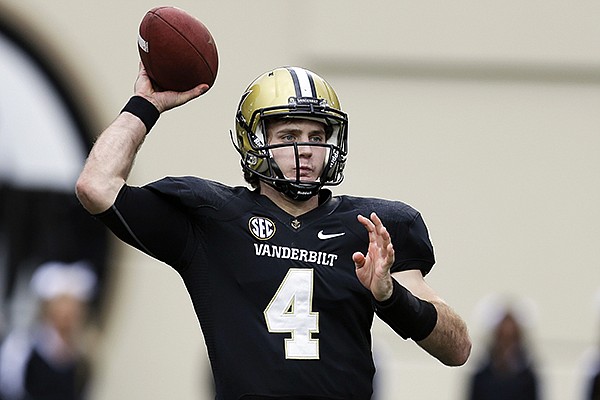 "I'm excited for Patton as we prepare this team for the season opener next Thursday," Mason said in a statement. "Patton has really made strides and consistently improved from the spring to now. I believe he has worked to earn this opportunity."

The 6-foot-4 Robinette, the only quarterback with any starting experience at Vanderbilt, beat out Johnny McCrary and Stephen Rivers, the younger brother of Philip who's quarterback for the NFL's San Diego Chargers. The Commodores started fall practice with six quarterbacks competing.

"We have three solid guys at the position now, along with the talented freshmen" Mason said. "Johnny and Stephen are very capable quarterbacks and both worked hard to make a strong case for the starting role. They made this a difficult decision," Mason said.

Robinette, who redshirted in 2012, played in 10 games last season. He started in a loss at Texas A&M, Vandy's first win in Gainesville against Florida since 1945 and the bowl win. He also helped beat Georgia and Tennessee in helping the Commodores finish the season 9-4 and ranked in The Associated Press' final Top 25.

When Austyn Carta-Samuels was hurt against Georgia, Robinette came off the bench helping the Commodores score 17 points in the fourth quarter for a 31-27 win over the Bulldogs. Robinette finished the season was 46 of 88 for 642 yards and has one more interception (five) than touchdowns (four) passing with the previous coaching staff using him more as a runner.

Robinette was a two-time state champion in high school at Maryville, Tennessee, where he completed 71.3 percent of his passes as a senior.

The Commodores redshirted McCrary last season with the Georgia native a dual-threat quarterback. The 6-7 Rivers, a native of Athens, Alabama, transferred to Vanderbilt in June from LSU and has two years of eligibility remaining.