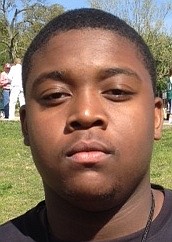 Bryant defensive lineman Cameron Murray is one of the better in-state prospects in the 2016 class.

Approximately 70 athletes participated in today's Elite Prospect camp. As of now, no offers were extended from today's camp.

Junior quarterback Jon Randall Belton, 6-2, 210 of West Monroe, La. looks like a linebacker or tight end but definitely has the talent to be a signal caller at the next level. Very good looking kid. He has offers from TCU, Ga. Tech, La.-LaFayette, Mississippi State and La.-Monroe.

Bellton was very impressed with the facilities. He liked the hills and mountains. The Hogs would be in the mix should they offer.

Linebacker Chase Johnston, 6-3, 226 pounds of Carl Junction, Mo. ran a 4.54 and 4.57 times in the 40 yard dash. One of the better looking athletes at the camp. He spoke to Coach Bret Bielema after the camp and was told they would stay in touch. He's cousins with former Hog basketball center Steven Hill.

Quarterback-recever Jeremy Smith, 6-3, 180 pounds, 4.51 seconds, of Missouri City (Texas) Fort Bend Marshall has offers from Michigan State, SMU, Oklahoma and Houston. He worked at both positions today. He sees himself as a receiver on the next level. He and his father, Terence were both very impressed with Arkansas. Defensive backs coach Clay Jennings was seen talking to father and son after the camp.

Receiver Brandon Singleton, 6-0, 170, 4.51 seconds in the 40 yard, of Boutte, (La.) Hahnville had a very good day. He and Hog quarterback commitment Ty Storey hooked up on a deep corner route for a touchdown. Very nice throw and catch.

The Hogs would be very much in the mix for him if they offer. He plans to attend the Stanford camp June 17. He has offers from Southeast Missouri State, Louisiana- Monroe, Northwestern State, Western Kentucky and Gambling.

Junior defensive lineman Cameron Murray, 6-2, 272, 5.13 said he received praise from defensive line coach Rory Segrest. He said he learned a lot from Segrest and he'll apply that towards his season. He has an offer from Arkansas State. An offer from the Hogs would be tempting, but he said he would wait things out.

Offensive-defensive lineman Kaden Clay Jackson, 6-2, 275, 4.9 of Kingfisher, Okla. said offensive line coach Sam Pittman really helped his footwork during today's workout. He said the Hogs like his speed and see him as a center. He ran a 4.9 in the 40.

North Little Rock safety Tyler Phillips, 6-1, 203 felt good about his performance. He said he gave up about two receptions for the day. He said defensive backs coach Clay Jennings believes his more comfortable at linebacker.

Phillips played linebacker for the Charging Wildcats last year but will play in the defensive backfield this fall.

Sternberg definitely passes the eye test. He has offers from South Dakota State and Sam Houston State. Last year he was 6-1 and was playing quarterback. The year before he stood 5-8. This past year was his first to play tight end and defensive end.