Hogs run away from Iona 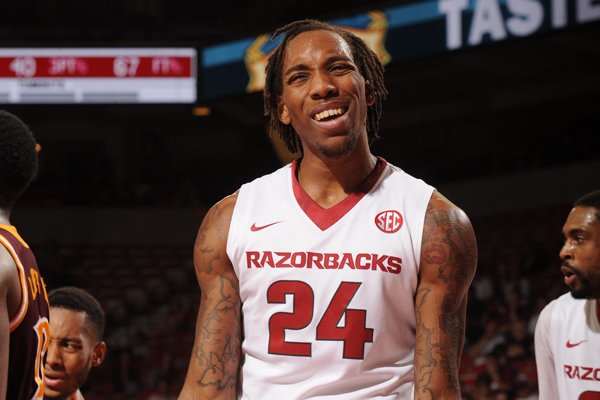 Arkansas' Michael Qualls pleads with a game official against Iona during the first half Sunday, Nov. 30, 2014, in Bud Walton Arena in Fayetteville.

FAYETTEVILLE — Michael Qualls and Anthlon Bell each scored 20 points to help No. 25 Arkansas to a 94-77 win over Iona on Sunday.

Qualls scored 10 points during a 4-minute stretch in the second half to spark a 17-4 Razorbacks run that put the game away. The junior scored 15 points after halftime while playing through an unspecified illness.

Anton Beard hit a 3-pointer with 10:58 remaining to give Arkansas the lead for good at 63-61. The teams exchanged leads six times in the second half.

Qualls, who had nine rebounds, made three 3-pointers during the final 10:12 and was also a defensive star for the Razorbacks. He recorded an acrobatic one-handed steal while falling out of bounds late in the game and shut down Iona guard A.J. English in the second half.

English made 6 of 8 field goal attempts in the first half and scored 19 points before halftime. Arkansas made a halftime defensive adjustment to put Qualls on the guard and he didn’t attempt a field goal for more than 12 minutes to begin the second half.

Iona (4-2) led by as many as eight points in the first half, but Arkansas quickly closed the gap with six 3-pointers before halftime. The Razorbacks led 44-40 at the intermission.

The Razorbacks finished the game making 11 of 25 3-point attempts. Bell made five 3-pointers.

Arkansas shot 49 percent in the second half and wore down the Gaels with its defensive pressure. The Razorbacks finished the game with 25 points off 18 Iona turnovers.

Rashad Madden added 16 points for Arkansas, while Bobby Portis had 11 points and nine rebounds. Kelvin Amayo had 13 points for the Gaels.

Arkansas improved to 6-0 for the first time since the 1997-98 season. The Razorbacks have won 11 straight games at Bud Walton Arena.

The teams entered the game as two of the highest scoring in college basketball. Arkansas ranked seventh in the NCAA at 89.2 points per game, while Iona was 12th with 88 points per game.

The game was played as part of the Global Sports Roundball Showcase.