Philadelphia forward likes what he sees on visit 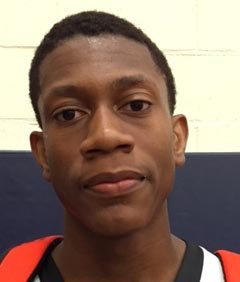 Arkansas hosted highly regarded swingman DeAndre Hunter for an unofficial visit on Saturday and helped itself in trying to lure him to Fayetteville.

"Definitely, seeing what's actually out there, not just going by what I hear, but what I actually saw with my own eyes," Hunter said.

Hunter said he heard what some out-of-state recruits hear about Fayetteville and Arkansas.

"That it's country and there's nothing around there to do, but from what I saw there's a lot to do," Hunter said.

Arkansas' position camp was held on Saturday, and Hunter was able to watch the camp and see how Coach Mike Anderson interacted with the 95 participants. He said he felt comfortable around the staff.

He later toured more of Walton Arena and the new practice facility.

Hunter is rated the nation's No. 22 small forward by ESPN. He was accompanied by Philly Pride Coach Sean Colson, who played for associate head coach Melvin Watkins at North Carolina-Charlotte in 1997-1998.

"He said he's a really good coach," Hunter said. "He said he had a really good relationship with him. He said if he didn't, he wouldn't tell me to go up there to visit."

He was told how the Hogs would like to use him.

"They said I would be one of the next versatile players they have," Hunter said. "One of the next great forwards, probably like Bobby Portis or something."

Hunter said he plans to visit Virginia on Wednesday and might take a trip to Villanova on Thursday. He said he'll probably announce the schools he'll officially visit in he next couple of weeks.

Arkansas Baptist sophomore center Connor Vanover made his first trip back to Fayetteville for Arkansas' position camp on Saturday since receiving a scholarship offer from the Hogs.

Vanover, 7-3, 210, also received offers from Ole Miss and Alabama this summer while playing for the 16-under Arkansas Wings.

"I feel great about them," Vanover said. "I'm glad I'm starting to get my first offers from three SEC schools, especially Arkansas, being my home state. I was very happy with that one. I think it's good overall to get those."

Vanover averaged 14.8 points, 9.4 rebounds, 3.2 blocks, 1.2 assists and 0.6 steals a game for the Eagles this past season. His ties to Arkansas are strong because his mother, Robyn, played basketball for Arkansas and was a three-year letter winner from 1987-1989 and his uncle, Terry Irwin, played football for the Hogs.

Vanover said there is no question his mother would like for him to attend Arkansas, "but she wants whatever is best for me."

The camp allowed him to build on his relationship with the coaches.

"It means a lot just being able to bond with the coaches and see what they have to offer to me," Vanover said.

Vanover has added 30 pounds after attending last year's Arkansas camp at 180. He said he hopes to continue fill out his frame.

The Arkansas position camp featured strong in talent for the 2017 and 2018 classes, and one of the more impressive performers was sophomore forward D.J. Weaver.

Weaver, 6-7, 188, of Houston Cypress Falls, showed athleticism and high energy along with a nice shooting touch. Houston and Texas are showing interest along with the Razorbacks.

He's rated the nation's No. 2 small forward and No. 11 overall prospect by future150.com. The Arkansas coaches weren't focused on his playing ability.

"Not really about recruiting, more of personal-type basis," Weaver said.

The trip was his first to Fayetteville.

"The program here seems pretty well, pretty nice and good," Weaver said. "The way they want us to play is pretty upbeat, nice tempo. Passing, fundamental-type play, and I like the players they invited. They have some good talent here as well as me."

Williams said he enjoyed spending time with the coaching staff.

"They have good personalities," Weaver said. "They don't try to get serious with you too much, but when the point comes across they know how to get down to business."