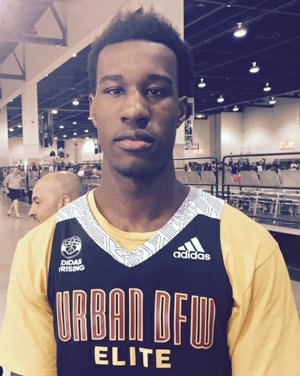 LAS VEGAS — Cameron McGriff is a long and athletic guard that's been talking to Arkansas Coach Mike Anderson and assistant T.J. Cleveland and will probably make his way to Fayetteville for a visit.

“I’m really interested in them,” McGriff said. “We’ve been talking on a weekly basis.”

“As long as they want me to come see the campus, I would be glad to,” said McGriff of an Arkansas visit. “Hopefully we can get something scheduled together.”

McGriff, who averaged 11.8 points and 7.7 rebounds for his high school team this past season, is rated the No. 20 small forward and No. 97 prospect in the nation by ESPN. He envisioned himself being recruited by high level DI schools.

“I’ve dreamed about a lot of this,” McGriff said. “It came from nothing, but hard work though. I expected this to come true one day.”

His strengths on the court favors appear to favor an uptempo program.

“I like to get up and down finish in transition and get rebounds and get to the free throw line,” McGriff said. “Just get my team going.”