NO. 17 MISSISSIPPI STATE AT ARKANSAS:

The Dak and Dan show

MSU is second best in SEC over past 25 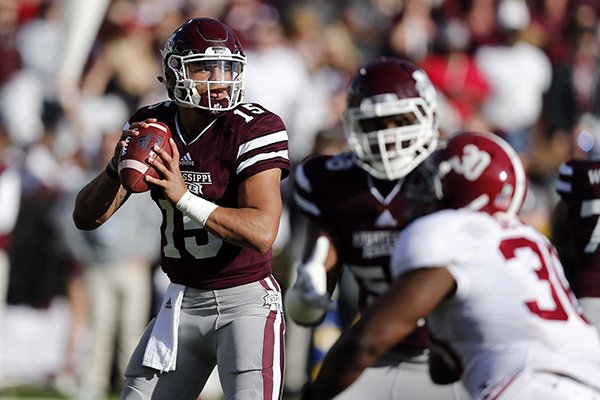 Mississippi State quarterback Dak Prescott (15) looks for an open receiver as he is pressured by Alabama linebacker Denzel Devall (30) during the first half of an NCAA college football game in Starkville, Miss., Saturday, Nov. 14, 2015. (AP Photo/Rogelio V. Solis)

FAYETTEVILLE -- Arkansas' best-yet run through the SEC West under Coach Bret Bielema ends on Saturday with a 6 p.m. kickoff against a Mississippi State team that has the second-best record of any SEC team in the past 25 games.

Mississippi State, which was ranked No. 17 in last week's College Football Playoff poll, has gone 19-6 in its past 25 games, including two victories over Arkansas. The Bulldogs have beaten the Razorbacks three consecutive times.

The Bulldogs (7-3 overall, 3-3 SEC) have far exceeded outside expectations after being picked to finish last in the West by SEC media.

They had won four in a row and were in contention for the SEC West title before last week's 31-6 home loss to Alabama.

"Mississippi State is a very, very good football team that has really been in some tough ones in the SEC," Arkansas Coach Bret Bielema said. "Obviously a team that emerged last year as one of the nation's best, and in my opinion, is still there."

The Razorbacks (6-4, 4-2) have found their groove over the past month, with road victories at Ole Miss and LSU establishing a four-game winning streak.

"They're one of the hotter teams, I think, in the SEC and maybe in the nation," Mullen said, noting Arkansas' impressive offensive performances and its strong defensive effort against LSU. " They're a well-coached, sound football team."

Quarterback Dak Prescott, one of only three SEC players (Tim Tebow, Johnny Manziel) to throw for 50 touchdowns and run for 30 touchdowns, holds 36 school records. Prescott has passed for 300-plus yards in four consecutive games, accounting for 14 touchdowns in that span.

"I think Dak Prescott is having a heck of a year," Arkansas defensive coordinator Robb Smith said. "He's accounted for over 3,000 yards in total offense, running it and throwing it."

The Bulldogs suffered significant personnel losses on defense, on their offensive line and at running back in the offseason, which is why they were picked to finish at the bottom of the West, but with Prescott and key receivers De'Runnya Wilson and Fred Ross leading the way, the Bulldogs rank No. 3 in the SEC with 438 total yards per game.

Wilson, who was carted off the field with a neck injury in the loss to Alabama, is expected to be OK, but his availability for Saturday's game isn't known yet.

Wilson, who ranks fourth in the SEC with 66.4 receiving yards per game, collided with Alabama's Marlon Humphrey during an interception return, causing a hush to come over the Wade-Davis Stadium crowd as he was tended to by medical staff.

The Bulldogs allowed a fourth-quarter touchdown for the first time all season last week against Alabama. Arkansas, which has struggled to score late in games in recent seasons, has broken out of that rut with has scored 69 points in the fourth quarter and in overtime over the past four games.

The Bulldogs will be making their first visit to Fayetteville since 2003 after five consecutive meetings with Arkansas at War Memorial Stadium in Little Rock. Missouri, which will play at Reynolds Razorback Stadium a week from Friday, is the only SEC school with a longer stretch of not playing in Fayetteville. The other 11 SEC teams have combined to play 34 games on the Arkansas campus since Mississippi State's last trip.

Mullen has coached in one game at Razorback Stadium, a 38-7 victory when he was offensive coordinator at Florida on Oct. 4, 2008.

"It's a neat town," Mullen said. "I've been there recruiting. I know that NWA Airport. What's weird is that the airport is out in the middle of nowhere, and then you have to go into town."

Bielema said the Razorbacks had about 3,000 tickets remaining for the game.

"So anybody that wants to buy a couple of extra tickets, I would love to have you out there man," Bielema said. "We're going to need all the support we can have to be be able to finish this thing off the right way."