Could be that bad year for Van Horn 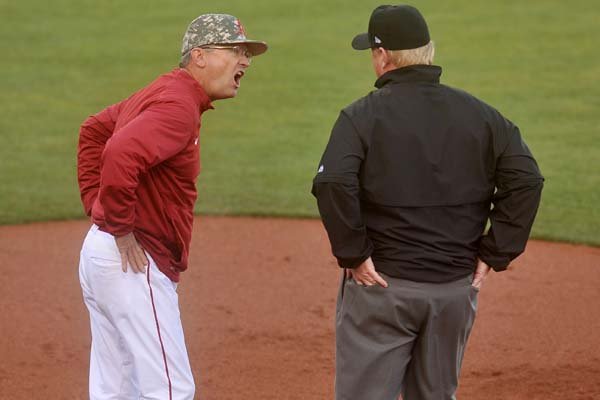 Arkansas coach Dave Van Horn argues a call with first base umpire Darrell Arnold in the first inning against Auburn on Saturday, March 26, 2016, at Baum Stadium in Fayetteville.

FAYETTEVILLE -- Coach any sport long enough and even the greatest will experience some bum years.

You can look it up.

Frank Broyles, Arkansas' winningest football coach and lone Razorbacks football national championship, is regarded among the greatest of his era. Even Broyles coached some teams to wallowing 4-5-1, 5-5 and 5-5-1 finishes.

Even John McDonnell, Arkansas' track and cross country coach and the greatest coach of any NCAA sport with 42 national championships and 84 conference championships, saw his SEC Outdoor champions skid to a horrific (by his standards only) 17th in his final NCAA Outdoor meet.

It happens to the best of them. This year, it's happening to Van Horn, one of the best.

This season seems way more woeful than Arkansas' 21-15 overall record would indicate. In SEC games the Razorbacks (4-11) have lost eight consecutive SEC games, and haven't had the lead in any of them.

Meanwhile, the hitters have stranded base runners like a stalled New York subway would passengers.

It all baffles, given these nationally preseason ranked especially after the Hogs were ranked in the preseason and early in the season swept nationally ranked Rice, Houston and Texas Tech in Houston.

Postseason hopes for 2016 remain, but the odds are shrinking. Arkansas' 17-12 SEC finish came off a 9-6 start in SEC play. The Hogs, based on their current SEC mark, would have to go 14-1 in their final 15 games to top last season's finish.

It would hurt Arkansas, of course, if its string of consecutive NCAA Tournament appearances ended at 14.

But it wouldn't hurt like allowing this year's losing to seep into next year, too.

"It's about the process," Van Horn said after Saturday's SEC loss to Florida, which gave the Gators a sweep of the series in Fayetteville.

Inevitably, lettermen from Broyles' 11-0 1964 national champions will tell you that championship would not have occurred without persevering returnees from the 4-5-1 team of 1963 learning from losing, including to loathe it.