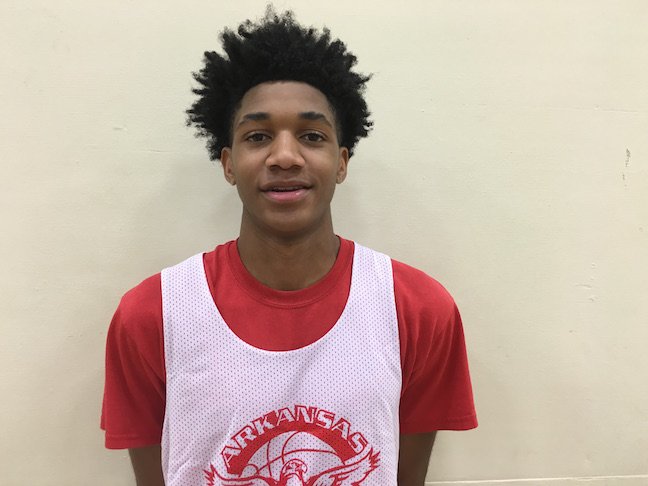 Arkansas Hawks 16-under shooting guard Isaiah Joe has committed to Arkansas after receiving an offer during a visit to Fayetteville today.

Joe, 6-2, 160 pounds of Forth Smith Northside chose the Hogs over scholarship offers from Alabama and Arkansas-Little Rock while drawing strong interest from Stanford, Tulsa, Auburn, Tennessee and numerous others.

Joe had an outstanding summer for the Hawks and was seen by Anderson and his staff numerous times. He averaged 15.3 points, 1.8 rebounds and an assist during the Adidas Summer Championships in Las Vegas on July 20-24.

He learned of the offer during a meeting in Coach Mike Anderson’s office.

“He went over a lot of stuff and he eventually gave me the offer and I accepted and I told him I was looking forward to being a Hog,” Joe said.

Being a Razorback is a dream come true for Joe.

“It was a lot of hours of staying in the gym and staying faithful and loyal to the game,” Joe said. “I put in a lot of time and work in and it got me to where I am now.”

Arkansas Hawks founder and Coach Bill Ingram believes the Hogs are getting an excellent player.

“They’re getting a great all-round player,” Ingram said. “He’s easily the best shooter in the state and he’s only going to get better".

Ingram said Joe is a better version of Arkansas junior guard Daryl Macon, who also played for the Hawks organization.

“He reminds me a lot of Daryl,” Ingram said. “He’s probably at this stage better than Daryl. Isaiah has probably grown four inches in the last year and a half. You can look at him and tell he’s not finished growing yet.”

Joe is the first Arkansas commitment for the 2018 class.