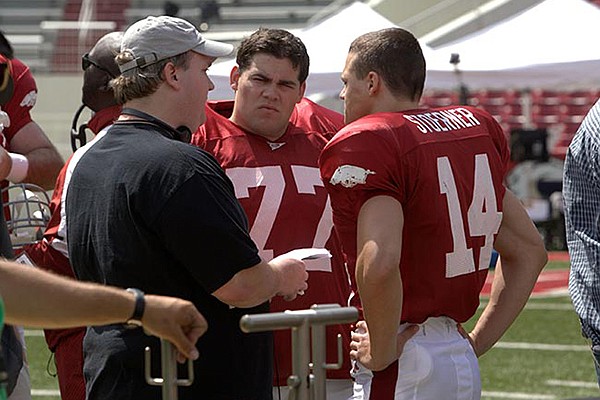 Director David Hunt, left, speaks with actors Chris Severio, center, and Connor Antico during filming for the movie "Greater" on Wednesday, May 29, 2013, at Razorback Stadium in Fayetteville.

FAYETTEVILLE — A week ago, Christopher Severio was gearing up for one of the biggest days of his life.

The actor was closing in on the premiere of what he hopes is his big break, playing the character of Brandon Burlsworth in the motion picture film Greater.

Then the rains began at his Denham Springs, La., home. He went to bed last Friday with about 18 inches of water in his front yard.

When he woke up the next morning, the water had receded a little. But less than an hour later, the Amite River was running through the home he grew up in and now shares with his ailing mother, Dawn.

"There was no warning," Severio said. "By the time I realized we needed to get out, it was already knee-deep in the yard. 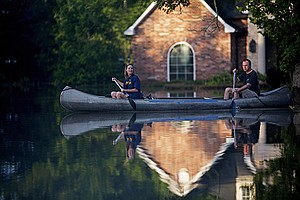 As waters begin to recede in parts of Louisiana, some residents struggled to return to flood-damaged homes on foot, in cars and by boat. (AP Photo/Max Becherer)

"If I hadn't have moved in with my mom, I don't believe she would have made it out. She didn't know what to do. By the time I got her out, it was already waste-deep in the yard and climbing pretty fast."

Severio was waving down rescue boats when he got a call to inform him that his great-uncle, Ted Tate, was also in distress and trapped in his home about 100 yards away.

"I made sure my mom was OK and went back for my uncle," Severio said. "By the time I got back in the water, it was up to my chest and it was a pretty strong current. I didn't think I was going to make it to his house. About midway through, I thought I was going to get swept away and there was no way I was coming back. That's how scared I was and how close it came to happening.

"I was able to convince him to get his dogs and get his medicine, and get out of the house. We waited on a rescue boat and I was able to get him to safety."

After taking on more than 4 feet of water, Severio's home that sits 4 feet off the ground is a total loss. Ruined are the material possessions like clothes and electronics, and the sentimental, irreplaceable ones like family photos and a home full of memories.

"Complete devastation," Severio said of the aftermath. "The water is well over 8 feet and in the neighborhood that I lived in, every home is destroyed. We have a shed that was picked up and moved against a tree."

Most surprising is that his home wasn't located in an area that was flood prone. He lived more than 2 miles from Amite.

So like many, he was taken aback by what is being called a 500-year storm that has killed 13 people and damaged around 40,000 homes. According to the Red Cross, it is the worst natural disaster in the U.S. since Hurricane Sandy.

"The most difficult thing to accept is that we're not in a flood zone and we all got it," Severio said. "Before I was born, they had a flood in '83 that was pretty bad, but they're saying this flood is five times worse than that was." 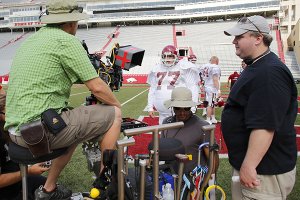 It's easy to forget by now that Severio, 25, is an actor who has a film premiering in more than 400 theaters next week. This is the culmination of the dreams instilled in him by his father and mother, who both aspired to be actors.

Instead, his father worked in factory plants and his mom sometimes worked three jobs to make ends meet.

"Before the flood, I kind of came to the realization that this wasn't just the fulfillment of my dreams," Severio said. "Before the flood, the film was the biggest thing I had ever done in my life. It was everything that I had worked for and everything I wanted as a child when I decided that I wanted to be an actor."

After the flood, walking along the red carpet at Fayetteville's Malco Razorback theater no longer seems so important. But he still has commitments to fulfill for his lead role in the film.

A few days before the floods, Greater producer Brian Reindl bought Severio a plane ticket to North Carolina. In Charlotte is the SEC Network's headquarters, and there Severio was scheduled to promote the film this week on various shows.

After hearing about the floods, Reindl said he wasn't sure Severio would be able to make it anywhere near an airport. When it was discovered that was a possibility, Reindl and Severio's family encouraged him to go ahead and make the trip, and leave behind a hometown in ruins.

"I told him that he would be able to bring a lot of awareness to their plight by making (the trip)," Reindl said.

And so despite losing his clothes, luggage and all other possessions, Severio went, wearing a T-shirt and shorts that were donated to him.

When he arrived at the network Thursday, he was ushered into the main studio. Behind him, SEC Network host Laura Rutledge was capturing his movement on a Facebook Live video.

Once inside the studio, Severio was met by several more SEC Network staffers. They had heard about his home and wanted to help.

With the assistance of Charlotte-based department store Belk, Severio was presented with hundreds of dollars worth of clothing, including shoes. The University of Arkansas also chipped in and provided athletic wear.

Severio was overcome with emotion and choked up as he thanked those who had helped.

"They were able to give me something that wasn't expected at all, but it was certainly a blessing," Severio said.

The Arkansas clothes will get good use even in south Louisiana. Severio had become a Razorbacks fan through filming the movie.

In fact, he bought an Arkansas shirt and wore it to Tiger Stadium last November for the Razorbacks' game at LSU. He was jeered as he cheered Arkansas on to a memorable win.

The events of Thursday only helped to reinforce his newfound fandom.

"It was nice to see they wanted to help out," Severio said.

Before next Tuesday's movie premiere in Fayetteville, Severio will return to Louisiana to pick up his mother. The damage will be awaiting him when he returns from Arkansas.

As he rebuilds, he hopes to draw on the inspiration he gained from his leading role.

"Through filming, I learned that Brandon did things his way," Severio said. "Everybody always says you've got to do things the Burls way.

"I like to tell everybody since this has happened that I've just got to do it the Burls way and keep moving forward, and never quit."