Hogs don't let up on Governors 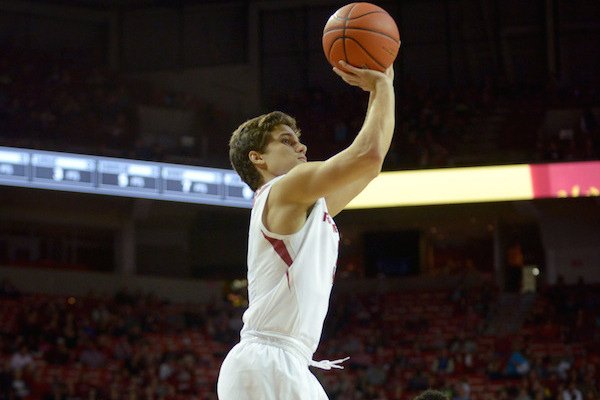 Arkansas senior guard Dusty Hannahs rises for a 3-pointer in the Razorbacks' 99-62 win over Austin Peay on Saturday, December 3.

FAYETTEVILLE -- Arkansas' basketball team is undefeated at home this season, but the Razorbacks have shown a tendency to build leads, then let their opponents creep back into the game.

It happened again in the first half Saturday night, but the Razorbacks made sure it wasn't an issue in the second half.

Arkansas kept pouring it on and beat Austin Peay 99-62 at Walton Arena before a season-high announced crowd of 10,059.

"We just decided to keep our foot on the pedal and not just let up," Arkansas freshman forward Adrio Bailey said. "Don't let them get nothing."

The Razorbacks had a letdown late in the first half when Austin Peay cut a 17-point deficit to 41-31 and heard about it from Coach Mike Anderson in the locker room.

"That halftime speech was pretty intense," Arkansas junior guard Jaylen Barford said. "So it made us go to a whole different level.

Austin Peay Coach Dave Loos said the Governors had a goal of getting within 10 points by halftime, but the Razorbacks didn't let them get any closer.

"I thought their whole team had an altogether different approach in the second half than earlier in the game," Loos said. "I told our guys you better be strong with the ball because they're smelling blood out there.

"They're willing to do the dirty work. I used them as an example to our team. They grind it out. I mean, they'll guard you.

"I can't say enough about our defense," Anderson said. "We built a wall."

"I feel like our defense tonight was awesome honestly," Barford said. "From the starting lineup to whoever played on the bench, it was just contagious.

"Our defense tonight was probably the best we played all year."

Anderson said the starting five of Barford, Kingsley, Daryl Macon, Manny Watkins and Dustin Thomas set a strong tone defensively and the bench took it to a higher level.

The Razorbacks had a 26-10 advantage in second-chance points thanks to outrebounding the Governors 47-31. Arkansas also had a 25-8 advantage in points off of turnovers.

"The big issue for us -- the thing I was most impressed with -- was Arkansas' defense and their rebounding," Loos said.

"In the second half I thought we established the inside," Anderson said. "It's amazing how when you start the inside game it opens up the outside game."

Anderson said his frustration at halftime stemmed from Arkansas failing to build on its lead by not taking advantage of its size inside, making ill-advised passes or taking quick shots.

"We don't do the things we've done all along to get the lead and so we kind of shoot ourselves in the foot," Anderson said. "In the second half, we just started doing the little things.