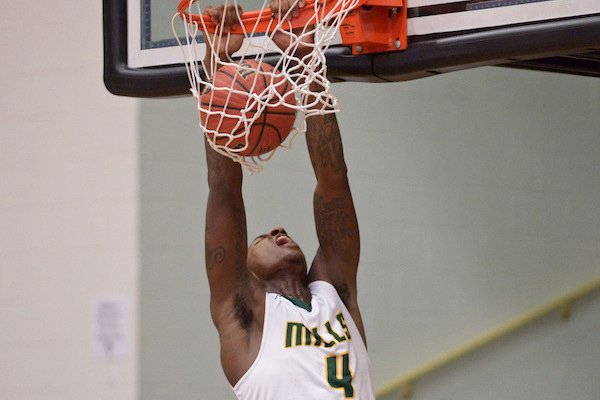 "I wanted to win against him, but when we become teammates, I want both of us to have the same goal of beating everybody in our conference," Hall said.

He scored a bucket off of a nice dribble and drive in the lane against Gafford, who has 89 block shots in 10 games this season.

"I had to go to him to his chest because if I didn't go to his check, he would've been able to block the shot," Hall said. "I had to turn it up so my team could win."

"I had to play smarter because I didn't want to foul out and cause my team to lose because as I can see right now my team needs me," Gafford said.

He fouled out with 5:16 left in the game and the Wildcats trailing 61-60. Mills (8-1) went on to outscore El Dorado (9-1) 13-4 to close out the game. Gafford said he enjoyed competing against his future teammate.

"It was pretty special, even though they got the W," Gafford said. "I was expecting a different outcome instead of fouling out."

"I'm better at my pull-up [jumper]," Hall said. "I'm working on my threes. It's been off lately. I'm still working on that. That way I can open up the floor for the drives. So if they play me back, I can shoot the ball."

As a senior, Hall said he has taken on more of a leadership role.

"I had to step up as a senior and lead the team," he said. "I have to tell them when to calm down and when to slow down. I have to be the dominate one on the floor for the team."

ESPN rates Gafford as the No. 9 center and No. 47 overall prospect in the nation. During a 97-18 victory over De Queen on Dec. 2, Gafford received national attention with a monster one-hand dunk off of a bounce pass that produced more than 400 retweets and likes on Twitter.

A MaxPreps commentator said the dunk reminded him of what one might see from Los Angeles center DeAndre Jordan, who's considered one of the best dunkers in the NBA.