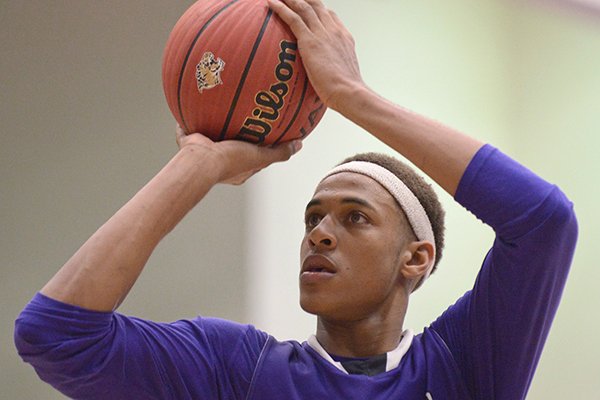 FORT SMITH — Even when it doesn’t appear Arkansas 2017 center signee Daniel Gafford is having a spectacular game, the numbers end up looking outstanding.

“Daniel could have had even bigger numbers than that, but I think he had times when he kind of let them push him around for a bit,” El Dorado head coach Gary Simmons said. “But when he decided it was time to get physical, he turned it up and gave us some great minutes.

“He has so much potential and sometimes I don’t think he knows just how good he is now and how great he can be.”

“I was hurting a little bit, but pushed through it,” Gafford said of an injury to his calf coming into the game and one to his chest during the game. “But I had to put that aside and go help us get this win. We let up and lose leads sometimes and we have to get it going again. We have to quit doing that.”

“Czar could have had 30 points if he didn’t miss those two free throws at the end,” Simmons said. “I had to get after him a little bit about that, but you can see how gifted he is.”

After regulation ended with the score tied 63-63, Bryant had a chance to win it in the first overtime, but Gafford’s ninth block sent the game into a second overtime.

Gafford had 4 points in the second overtime, including a ferocious rebound dunk that saw him come off his back on the floor to punch it in.

“I got a little mad at that and had to go power that one in with some authority,” Gafford said. “The biggest thing I need to work on is being physical all the time. Makes me want to get back in the weight room.”

The Razorbacks are an SEC-best 11-1 heading into Thursday night’s conference opener with visiting Florida.

“They are playing great and we have some crazy talent coming in next year and the year after that,” Gafford said. “The future is going to be great for us.”