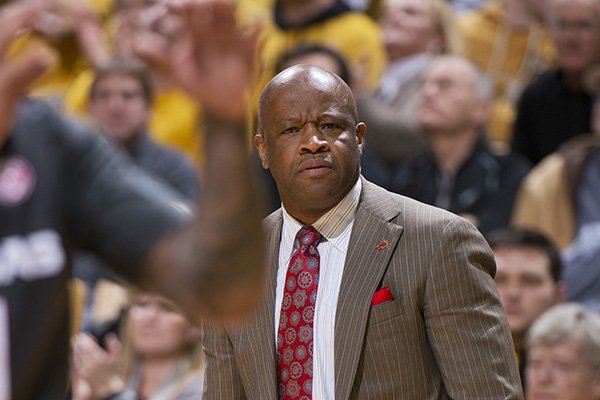 The first 19 of those routs came when Anderson was Missouri's coach. His latest came at the Tigers' expense.

Arkansas has started 3-1 in SEC play for the fifth time in 25 seasons after beating Missouri 94-61 Tuesday night. Here is a rundown of the Razorbacks’ 3-1 starts:

What became Anderson's most-lopsided victory in an SEC game in five seasons with the Razorbacks occurred three seasons after he endured a 93-63 loss to the Tigers on March 5, 2013. Anderson constantly was booed by the sellout crowd of 15,061 that night in his first game as a visiting coach at Mizzou Arena by fans upset he left Missouri for Arkansas.

Given the chance to gloat Tuesday after the Razorbacks (9-7, 3-1 SEC) won their third consecutive game, Anderson declined.

"Whether it's one point or 30 points doesn't matter," he said. "You just want the win. That's my mindset.

"I was just happy we played well. It was against Missouri tonight."

The game turned into Missouri's worst home loss in 59 years, since another 33-point pounding when a Kansas team led by Wilt Chamberlain beat the Tigers 91-58 at Brewer Fieldhouse on Feb. 16, 1957.

The only other Missouri home loss more lopsided was 74-38 to Iowa Pre-Flight -- a team of pilots being trained by the United States Navy for combat in World War II -- on Jan. 13, 1945.

It also was the most points Arkansas had won by in an SEC road game, surpassing an 85-63 victory at Mississippi in 1993.

Anderson -- whose previous largest SEC victory was 110-80 over Ole Miss at home in 2014 -- insisted he didn't get extra satisfaction from the Razorbacks' margin of victory over Missouri, which plays at Arkansas on Feb. 20.

"Every game is an adventure," he said "We'll play these guys again, and I'm sure it will be a different game."

"I know the shots fell for us, but we came out with the mindset that we're going to play defense," said junior forward Moses Kingsley, who led the Razorbacks with 24 points, 5 rebounds, 4 blocked shots and 3 assists. "We were going to get stops from the start, and that's what worked for us."

"They probably did a better job than anybody all year of taking us out of our stuff," Tigers Coach Kim Anderson said. "They just made it hard for us to execute."

Mike Anderson said the Razorbacks were dialed in defensively and that he liked their inside-out action on offense initiated by going to Kingsley, who hit two layups in the game's first 55 seconds on assists from Jabril Durham.

Kim Anderson said the Tigers may have been too focused on extending their defense against Arkansas guards Dusty Hannahs and Anthlon Bell -- who combined to score 51 points and hit 13 of 20 three-pointers in an 82-68 victory over Mississippi State on Saturday -- and left Kingsley open inside as well as driving lanes to the basket.

"I thought Kingsley dominated the game from start to finish," Kim Anderson said. "We didn't have an answer for him."

"We've got to utilize our advantage in Mo," Arkansas guard Manny Watkins said of how the team fed the ball to Kingsley. "He's one of the toughest guys in the paint to guard in the country. He just opens up everything for everybody."

Durham didn't score for the first time this season, but he had six assists -- the 14th time in 16 games he's had five or more.

Kim Anderson, the Big Eight player of the year at Missouri in 1976-77 and a longtime assistant to Tigers Coach Norm Stewart, said he was embarrassed by the final score. He also made sure to praise Arkansas.

"One of the things that we've had a problem with is getting punched in the mouth and not punching back early in games," Kim Anderson said. "That's happened before, and we just didn't respond.

"We did for a while, in spurts, but they would punch us again. If we were a prize fighter, we would have gotten knocked out.

"The conference season is 18 games, not four," Watkins said. "We're in a good position right now, but we've just got to keep playing hard and keep doing the things that got us to 3-1. That's all we can control."

Mike Anderson said his top concern is the Razorbacks continuing to improve rather than focusing on their SEC start.

"I'm more interested in us playing well, playing up to our capabilities," he said. "I think that's the most important thing.

"If we go out and do the things we work on each and every day, the wins and losses will take care of themselves."