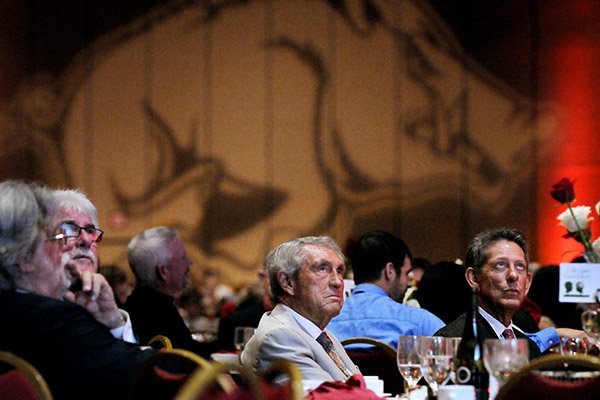 Legend has it that when Frank Broyles decided to do something about the pitiful state of Arkansas Razorbacks basketball, he risked his life to hire Eddie Sutton.

Broyles flew through a snowstorm to hire Sutton because the athletic director had heard Duke was going to offer him a job.

What Broyles did in 1974 was change the attitude and landscape of basketball in Arkansas. He allowed Sutton to lay a solid foundation. Sutton will be honored by the UA on Feb. 20 by having a banner raised to the rafters of Walton Arena, three weeks before his 80th birthday.

When Sutton came to Arkansas, the program had had one winning season in the past seven and hadn't been to the NCAA Tournament since 1958.

The area beneath the bleachers of Barnhill Arena -- seating was 5,200 (and no one remembered whether the place had ever been full) -- was dirt.

Basketball wasn't even an afterthought at the football school.

Sutton hired Pat Foster and Gene Keady as assistants, and they looked for hidden gems.

Sutton also turned to the football team in hopes of attracting more students. Some of the players jumped on board and became known as the "Mad Hatters" because they wore crazy hats to the games.

Until shoe companies got involved, coaches had to supplement their income with summer camps, and Sutton, Foster and Keady called just about every high school coach in the state to get bodies to their first camp. Their wives baked cookies and cupcakes that the campers could buy during breaks.

Mostly, though, Sutton's greatest act of marketing was on the floor. He won.

In 11 seasons, Sutton was 260-75 (.776 winning percentage), and he made the NCAA Tournament the last nine years he was at Arkansas.

His last season at Arkansas was 1985. It was one of drama, though. Few knew Sutton was losing a battle with alcohol, and he and Broyles were at odds almost the entire season.

On April 2 of that year, the day after Villanova upset Georgetown in the national championship game in Lexington, Ky., Sutton was announced as the new head coach of the Kentucky Wildcats.

Sutton said he would have crawled to Kentucky; it was a shot at Broyles but for a while the Razorback fans took it personal.

A few days later, Broyles hired Nolan Richardson. Richardson didn't live in Sutton's shadow long as he built a championship wing on that foundation and distinguished himself as the all-time winningest coach at the school with a record of 390-170. He took the Hogs to three Final Fours and won the 1994 national championship.

The fishbowl existence, pressure to win and the bottle got the best of Sutton, and he was only at Kentucky for four seasons. After sitting out from coaching for a year, he went to Oklahoma State, his alma mater, where he would win 368 more games and become the first coach to take four teams to the NCAA Tournament.

In Sutton's fifth season with the Cowboys, tragedy struck when a private plane crashed after a game at Colorado, killing two players and six members of the basketball and radio broadcast team.

A few years later, Sutton was involved in an alcohol-related car wreck and left OSU.

When he finally retired -- and he has been sober since leaving the Cowboys -- including an interim stint at San Francisco, he had 806 victories, one of only eight men's Division I basketball coaches to win more than 800 games.

It soon will be 31 years since Sutton last coached a game at the UA, but he is still remembered for laying the foundation and putting Razorback basketball on the map.